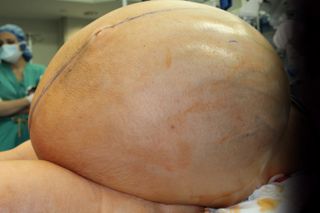 The tumor, a "benign [noncancerous] mucinous ovarian tumor," was removed during a 5-hour surgery that involved more than 20 specialists at Danbury Hospital, according to a news release from Western Connecticut Health Network.

A "mucinous" ovarian tumor is a type of epithelial ovarian tumor, meaning that it grows from the cells that cover the outside of the ovaries, according to the National Ovarian Cancer Coalition (NOCC). Most tumors that grow from these cells are noncancerous; however, in cases where these types of tumors are cancerous, they are very dangerous, as they are often not diagnosed until the disease is advanced, the NOCC says.

The woman had gone to her gynecologist after she experienced a rapid weight gain — about 10 lbs. (4.5 kg) a week — over a two-month period, according to the release. A CT scan showed that she had a large mass on her ovary. [5 Things Women Should Know About Ovarian Cancer]

"I might expect to see a 25-lb. [11 kg] ovarian tumor, but a 132-lb. tumor is very rare," Dr. Vaagn Andikyan, a gynecologic oncologist at Danbury Hospital who operated on the woman, said in the statement.

Andikyan noted that when he met the woman, she was "extremely malnourished because the tumor was sitting on her digestive tract, and she used a wheelchair because of the tumor's weight."

The surgeons were able to successfully remove the tumor, as well as the woman's left ovary, in a single operation. They also removed excess skin from her abdomen during the same surgery.

The woman went home two weeks after the surgery, and she is expected to make a full recovery, according to the statement.