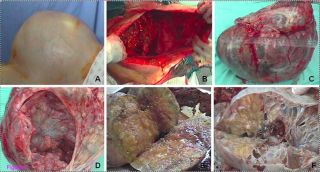 A woman who complained of a rapidly-expanding waistline was surprised to find an unusual cause: an 88-pound (40 kilogram) mucus-filled tumor
(Image: © de Lima et al, Journal of Medical Case Reports, 2014)

A woman who complained of a rapidly expanding waistline was surprised to discover an unusual cause of her girth: an 88-lb., mucus-filled ovarian tumor.

The 57-year-old Brazilian woman noticed her midsection grew over the course of a year, but other than a heavy feeling in her belly, and breathing that was slightly faster than normal, she had few other symptoms, according to a report of her case, published March 4 in the Journal of Medical Case Reports.

Mucus-filled ovarian cysts, known as mucinous cystadenomas, are fairly common, and most often strike women ages 30 to 50, said Dr. Jonathan Herman, an obstetric surgeon at Long Island Jewish Medical Center in New Hyde Park, N.Y., who was not involved in the woman's case.

Although some cysts are cancerous, most are benign. The majority of these benign tumors are very tiny, and disappear on their own with no treatment. The main symptoms are a feeling of bloating or heaviness, or that pants and skirts don't fit well. Larger cysts can put pressure on the bladder as well, Herman said. [5 Things Women Should Know About Ovarian Cancer]

But occasionally, a cyst will grow until it meets resistance from the abdominal wall, Herman said.

"When you cut it open, mucus just comes pouring out," Herman told Live Science. "Mucus is very heavy, so they grow to a large size."

The woman — an overweight, postmenopausal 57-year-old from Brazil — first contacted doctors about her rapidly growing waistline in 2003. She had slightly shallow breathing, and a 52-inch (132 centimeters) waistline.

An ultrasound of her stomach revealed a huge, mucus-filled mass. The tumor was so big that it had shoved her uterus to the side, squished her abdominal contents and extended all the way up to her diaphragm.

The tumor had some signs of early-stage cancer, so the woman underwent several rounds of chemotherapy. Surgeons also removed part of her fallopian tubes, uterus and lymph nodes.

Ten years later, the patient is doing fine and has no more symptoms.

Though it's unusual for such masses to grow so large, Herman said he has seen similar cases. He once operated on a young woman whose ovarian cyst grew to between 20 and 25 lbs. (9 to 11 kg).

"I had to roll it off the table; it was so heavy," Herman said.

Women may miss the symptoms of ovarian cysts because they think they're just putting on weight, he said.