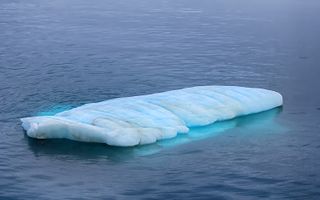 A region in the Arctic Ocean is undergoing a historic identity crisis, as recent climate change has warmed it so much that it might as well be considered part of the Atlantic.

All of the Arctic has been heating up in recent decades, but nowhere is it as dramatic as in the Barents Sea, northeast of Finland. There, temperatures are climbing faster than anywhere else in the Arctic Ocean — not only in the atmosphere but down through the water column, scientists recently reported in a new study.

The northern Barents is also becoming saltier as it warms, mostly because there's little seasonal melt of sea ice to dilute the water body. These temperature and salinity changes nudge the northern Barents to a state that more closely resembles that of the neighboring Atlantic Ocean, rather than the Arctic, which could have dramatic implications for its marine ecosystems, according to the study. [8 Ways Global Warming Is Already Changing the World]

More than 70 percent of Earth's surface is covered by oceans, holding 97 percent of the planet's water. Historically, the world's oceans have been referred to as the seven seas, but today, they are more commonly divided geographically into the Arctic, Atlantic, Pacific, Indian and Southern oceans. The term "sea" — though often used interchangeably with "ocean" — typically describes bodies of salt water that are partly enclosed by land, the National Oceanographic and Atmospheric Administration (NOAA) explains.

What defines where one ocean ends and another begins? Geographical features on the ocean floor and physical properties like temperature help to determine ocean identity. But because there are no physical borders, you could argue that Earth has just one really big global ocean, and you wouldn't be wrong, according to NOAA.

Of all the ocean basins, the Arctic Ocean is the smallest, covering an area of about 5.4 million square miles (14 million square kilometers) — about one and a half times the size of the United States, NOAA reported.

And according to the new study's findings, the Arctic Ocean is on the brink of losing some real estate to its warmer neighbor, the Atlantic.

'Atlantification' of the Arctic

The Barents Sea lies where the Atlantic Ocean meets the colder Arctic. In its northern region, the Barents is ice-covered, cold and harsh. By comparison, its southern region, fed by warm Atlantic waters carried to the north by the Gulf Stream, hosts "a rich ecosystem and lucrative fisheries," the study authors reported.

Heated water from the Atlantic flows into the Arctic as a layer that travels deep, beneath layers of cold water. In the interior Arctic, a perennial ice cover and a cold, dense atmosphere keep the upper ocean layers cold enough that the warmer water can't mix with them too much, according to the study.

But in the warming Barents, climate change is stripping its icy cover. Seasonal sea ice — which maintains the area's frigid environment and provides habitat for marine mammals, birds and microorganisms — is disappearing. Since 2000, this Arctic zone has warmed by 2.7 degrees Fahrenheit (1.5 degrees Celsius), marking it as a "hotspot of global warming" and significantly reducing the amount of seasonal ice, the researchers wrote.

As ice vanished, warmer Atlantic waters mixed upward, heating Arctic waters through to the surface; at the same time, reduced surface ice meant less fresh water from seasonal melt to dilute the warming salt water. By the mid-2000s, a noted shift occurred in the water column. Where it was once highly stratified, with distinct upper zones of cold water, warm conditions prevailed throughout. And now, Arctic water at subzero temperatures in the northern Barents "is diminishing rapidly and is now almost entirely gone," according to the study.

Previously, simulations had suggested that conditions in the northern Barents Sea will be indistinguishable from the Atlantic by the end of the century. But this study's findings suggest that the sea's "Atlantification" is likely to come much sooner, the scientists reported.

"Unless the freshwater input should recover, the entire region could soon have a warm and well-mixed water column structure and be part of the Atlantic domain," the scientists wrote in the study. This represents "a historically rare moment," in which a large body of water would undergo an unprecedented transformation, "from Arctic to Atlantic type," the researchers concluded.

The findings were published online June 25 in the journal Nature Climate Change.