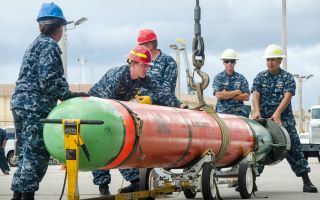 Sailors aboard the submarine USS Frank Cable stabilize a Mark 48 heavyweight torpedo during a weapons onload in Guam in 2017.
(Image: © U.S. Navy)

The U.S. Navy's most commonly used torpedo — the Mark 48 — is getting a makeover that will make it stealthier, deadlier and more far-reaching than ever before, according to news sources.

The upgrade will help the submarine-launched heavyweight torpedo — which is a self-propelled underwater missile — demolish enemy ships, submarines and small boats in both shallow and deep waters, according to Warrior Maven, an armed-forces-focused news site.

But the new torpedo isn't ready for prime time just yet. In fact, it has yet to be built; the Navy issued these specs, and others, in a recent solicitation to the industry, Warrior Maven reported. [Weird Weapons: Strange Artifacts in the US Navy's Archives]

Once completed, the high-tech torpedo will help the Navy hit its targets more effectively and from farther distances, helping it compete with other countries that are ramping up their navies, including Russia and China, Warrior Maven noted.

For instance, the upgraded weapon's guidance and control systems will have a better communications structure that replaces its copper wire with fiber-optic wire, allowing the submarine to send more data to the torpedo and vice versa, in effect giving the deadly device a better reaction time, Shephard Media reported.

All classes of U.S. Navy submarines use the MK 48 heavyweight torpedo as an anti-submarine and anti-surface warfare weapon, including the Virginia class and yet-to-be-made Columbia class subs, Couch said. (The first Columbia class submarines are expected to be operational in 2031, the U.S. Department of Defense reported.)

The upgraded torpedo is expected to be operational in 2024, Warrior Maven reported. The Navy has used the model that is being updated — the Mod 7 — since 2006.

"The latest version of the Mk 48 ADCAP is the mod 7 Common Broadband Advanced Sonar System [CBASS]," Couch told Warrior Maven. CBASS allows electronics to go in the torpedo's nose, as well as its guidance system.

Lockheed Martin Sippican is already working on the torpedo's new guidance and control systems, and Science Applications International Corp. (SAIC) has a contract for the weapon's afterbody (its tail end) and propulsion section, Couch said. On June 20, Northrop Grumman Systems Corp. was awarded a contract to use its engineering and maintenance services on the MK 48, the Department of Defense reported.

The United States isn't the only country to use the MK 48 torpedo; Australia, Canada, Brazil and the Netherlands use it, too, Warrior Maven reported.