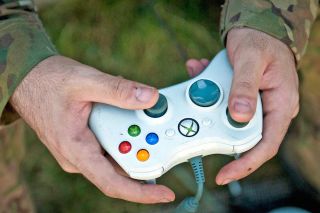 Microsoft usually sells its Xbox 360 controllers to gamers who play "Call of Duty" or "Halo," but now these controllers have an entirely new customer: the U.S. Navy.

The Navy is using Xbox 360 controllers to operate periscopes aboard newer submarines, including the Virginia-class subs — vessels that are nuclear-powered and can launch attacks with tomahawk missiles and torpedoes, according to Military.com.

While older submarines have periscopes that allow just one user to look through it at a time, newer subs have high-resolution cameras and large monitors. But despite this high-tech update, the Navy still used a complicated, traditional helicopter-style stick to operate the periscope. [7 Technologies That Transformed Warfare]

With the update, the Navy can replace this challenging system with the Xbox 360 controller— a joystick that many young sailors have already used, and one that requires less training, according to the Associated Press.

The controllers are also vastly less expensive: Whereas the older system, called a photonic mast handgrip and imaging control panel, costs about $38,000, an Xbox 360 controller is just $30 to $40.

The Navy has been working with Lockheed Martin to find everyday commercial products that can lower costs and incorporate sailors' existing skills. This Xbox 360 purchase is part of that effort, The Virginian-Pilot reported.

A yet-to-be-built Virginia-class sub, named the USS Colorado, will be the first submarine to be outfitted with the Xbox controller. It is expected to be commissioned by November, according to the AP.

Other Virginia-class submarines, including the Norfolk-based USS John Warner, will also get the video game technology as the sub is upgraded, Brienne Lang, a spokeswoman for the Navy's program executive office for submarines, told The Virginian-Pilot.