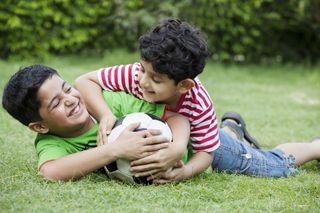 Testosterone: It's the key hormone involved in muscle mass, male fertility and the onset of male puberty. And a new paper now suggests that your testosterone levels aren't determined by such factors as genetics or race, as some folk wisdom says, but instead by where you lived as a child.

In the study, researchers at Durham University in England compared different groups of men to one another based on where they spent their childhood — either in Bangladesh or London — and whether they had Bangladeshi or European ancestors. Their results, published in the journal Nature Ecology & Evolution yesterday (June 25), showed that childhood environment was the more important factor in determining everything from the men's current testosterone levels, to their height, to the age the men reached when they entered puberty.

Still, the study revealed some important differences between the populations. Men born in either the U.K. or Bangladesh, but who were raised in the U.K., seemed, on average, to share similarities in their levels of testosterone, height and reported ages when they entered puberty, regardless of ancestry. Men born and raised in Bangladesh — including those who moved to the U.K. as adults — were found on average to have entered puberty later, were shorter and had lower testosterone levels. (Because these results are based on averages, they don't tell you anything significant about the testosterone levels of any given man raised in the U.K. or Bangladesh.)

Dr. Landon Trost, an endocrinologist at the Mayo Clinic who was not involved in the study, said that the findings suggest that something happens in childhood — something related to the environment — that can have lifelong effects on men's testosterone production.

That fits with what doctors already know about how childhood diseases can impact testosterone production, Trost said.

"We see examples in infertility, where the timing of certain infections — mumps, for example — will impact long-term [sperm production]," Trost told Live Science.

A childhood infection, doctors know, can have permanent effects on testosterone levels.

Trost cautioned, however, that while the study does seem to show definitively that environment is a much more important factor than genetics in testosterone production, it isn't definitive in showing that those environmental factors are most important in childhood.

"It is also likely that children who migrate at a younger age are more likely to adopt the lifestyle of their new home," he said, "compared to those who migrate later — and who may hang on to diets, traditions and customs. That consideration may account for the findings noted with the study."

In other words, it's possible Bangladeshi men who move to the U.K. as adults lead different enough adult lives from Bangladeshi men raised in the U.K. that those differences account for the two groups' different testosterone levels — as opposed to their childhood environments.

Of course, it's also important to recognize that all the differences reported in this study are based on broad averages: Any given man born and raised in Bangladesh could easily have higher testosterone levels than any given man born in the U.K. The populations overlap heavily, even in this study. It's only in relatively large samples, like the 359 men tested for this study, that significant differences emerge.