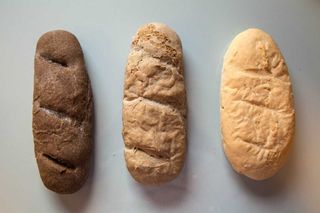 Three breads produced with different blends of wheat four and, from left to right, 30 percent, 10 percent and zero percent cricket powder. The more cricket powder was used, the darker the color.
(Image: © A. Osimani et al.)

If bread made from powdered crickets isn't gross enough for you, this article won't help: A new study from Italy finds that breads made with powdered crickets may be loaded with potentially dangerous bacterial spores.

That's a setback for what is otherwise a highly nutritious bread, according to the researchers. [7 Insects You'll Be Eating in the Future]

For decades, scientists have known that edible insects can be highly nutritious. What's more, switching from eating livestock to eating insects is good for the environment, as it takes much less space and other resources to farm insects. (Previous research, for example, has found that livestock currently use about 70 percent of all available farmland worldwide.)

But it goes without saying that convincing non-insect-eating people to eat insects can be difficult. So, to make insects more appealing to potential diners, researchers have experimented with making food that contains insect-based ingredients but doesn't obviously appear to do so. (Think of it like tricking your kids into eating veggies by throwing them in a smoothie.)

To see what breads made with insects might be like, scientists in Italy baked experimental loaves using different blends of wheat flour, plus a special ingredient: a commercially available powder made from crickets.

"The main goal of the study was to mask the presence of insects in everyday foods by using powders instead of whole insects," said study senior author Lucia Aquilanti, a food microbiologist at Marche Polytechnic University in Ancona, Italy.

And, perhaps more important, the more cricket powder there was in a loaf, the less tasty people judged it. "The taste was not too pleasant — it seemed a bit like cat food," Aquilanti told Live Science.

There was another downside, too: the presence of bacterial spores — a dormant state of some types of bacteria — in the cricket-based breads. These spores raised potential safety concerns, the researchers said, as such germs might potentially spoil the breads, or even make people sick.

This doesn't mean we've reached the end of the road for breads made with cricket powders, though. There are a number of techniques, such as gamma irradiation, that may rid cricket and other insect powders of the potentially dangerous spores, Aquilanti said. (Gamma irradiation exposes items to gamma rays to sterilize them.)

Aquilanti also noted that the researchers have experimented with other insect powders in breads and found "the final flavor is extremely dependent on the species." For instance, bread made from mealworm powder "has a very nice nutty flavor," she said.

Still, it wasn't all bad news for the cricket breads. The scientists found that the breads with cricket powder were more nutritious than the wheat-based breads. In particular, they contained more protein and essential amino acids, as well as fatty acids that help add calories and keep bread from going stale, than the purely wheat-based loaves.

The scientists detailed their findings in the August issue of the journal Innovative Food Science and Emerging Technologies.