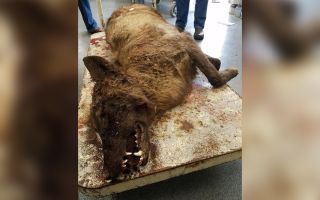 A wolf-like animal was shot on May 16, 2018, after it was spotted in a private pasture with livestock near Denton, Montana.
(Image: © Montana Fish, Wildlife and Parks)

A mysterious "canid animal" shot by a Montana rancher in May had wildlife officials scratching their heads about what kind of beast it was, but DNA testing finally has answers.

It resembled a wolf — mostly — though some features were distinctly un-wolflike, which led to some pretty wild speculation about whether it was a dire wolf (they're long-extinct, so definitely not), a dog-wolf hybrid (dogs and wolves can interbreed) or perhaps a dog-human hybrid (seriously, people?), The Washington Post previously reported.

But DNA analysis showed that the beast wasn't so mysterious after all, and it was merely a gray wolf (Canis lupus), from the northern Rocky Mountains. [My, What Big Teeth: Wolves Gallery]

Tests conducted at the U.S. Fish and Wildlife Service (FWS) forensic laboratory in Ashland, Oregon, put the wild rumors about the wild canid to rest. After comparing the animal's DNA with thousands of samples taken from wolves, dogs and coyotes, lab officials confirmed the suspicions of the Montana Fish, Wildlife and Parks' (MFWP) wildlife health lab — that the mystery canid was a female gray wolf, and "a relatively normal looking" one at that, MFWP representatives said in a statement.

She was probably about 2 or 3 years old, weighing about 85 pounds (39 kilograms) and measuring nearly 4 feet (1 meter) from nose to rump when she was killed, MFWP officials reported. Adult gray wolves typically weigh between 70 and 110 pounds, and can measure up to 6 feet (1.8 m) long, according to the FWS.

And though her dark brown color is unusual in gray wolves, which are typically a mix of brown and gray with lighter fur on their legs and bellies, their coats can also be solid brown, black or white, according to the National Wildlife Federation.

However, her legs were shorter than is normal for wolves, and her ears were unusually large, which fueled confusion about her species. Upon closer inspection, officials noted that the size of her paws and canines (too small and too short, respectively) also called into question whether she was truly a wolf.

The female wasn't lactating when she was killed, so it's unlikely that she had the opportunity to pass along her unusual physical features to a litter of pups. However, it's possible that genes for these deviations in her limbs, teeth and ears could be carried by her siblings and parents, and so may surface in Montana again, possibly sparking more mistaken sightings of wolf-dog hybrids, long-extinct dire wolves, or the mythical wolf-human cryptid known as Dogman.