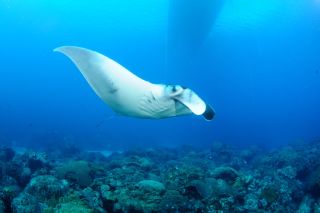 Tucked away in the warm waters of the Gulf of Mexico, the world's first known nursery for baby manta rays has been discovered amid the shallow reefs. And marine scientists are excited.

Biologist Joshua Stewart, a doctoral candidate at the Scripps Institution of Oceanography in San Diego, noticed several juvenile mantas (Mobula birostris) while conducting research at Flower Garden Banks National Marine Sanctuary, about 100 miles (160 kilometers) south of the Texas-Louisiana border. Noting the rarity of this sighting, Stewart teamed up with sanctuary staff to determine whether this spot really was highly frequented by the little rays.

The team combed through 25 years' worth of dive logs and photographs collected by the sanctuary's staff divers, according to a statement released by Scripps. The scientists used the unique markings on the undersides of the rays to identify them, much like matching human fingerprints. They found that roughly 95 percent of the mantas visiting Flower Garden Banks were juveniles. Stewart's team confirmed the area as a nursery by comparing the young mantas' use of the Flower Garden Banks habitat to known indicators of shark and ray nurseries. [Marine Marvels: Spectacular Photos of Sea Creatures]

"The juvenile life stage for oceanic mantas has been a bit of a black box for us, since we're so rarely able to observe them," Stewart, who also serves as executive director of the manta conservation program Manta Trust, said in the statement. "Identifying this area as a nursery highlights its importance for conservation and management, but it also gives us the opportunity to focus on the juveniles and learn about them."

The team believes that the juvenile mantas are spending time along the warm, shallow reefs to recuperate from forays into deeper, colder waters where the plankton they eat is more common. The reefs offer protection from several large shark species found in the area, which the young manta rays would not have if they were simply to sun themselves in the open surface waters above their feeding grounds. The team is still uncertain where the rays are born and hope to address this question in future research, Stewart told Live Science.

In January 2018, the U.S. government listed manta rays as threatened under the U.S. Endangered Species Act. The rays are targeted by certain fisheries, primarily in Southeast Asia, and caught incidentally during the fishing of other species worldwide.

Flower Garden Banks has been pursuing a plan to increase the protected areas within the sanctuary since 2006, Emma Hickerson, the sanctuary's research coordinator, told Live Science. The current proposal has broad public support, she said, and includes 14 more reefs in the vicinity of the current sanctuary.

"We know that the mantas are utilizing sites inside and outside the current sanctuary boundaries," Hickerson said, "including banks within the sanctuary expansion proposal."

The results were detailed online June 15 in the journal Marine Biology.