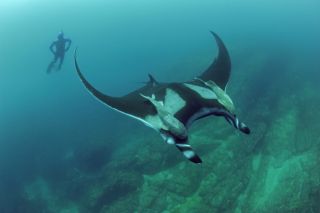 Until recently, manta rays — which sail through tropical and temperate ocean waters, looking much like enormous kites — were thought to migrate great distances across ocean basins, as do many of the largest marine animals.

But a new study finds that these big fish have a much smaller range than scientists had thought.

Researchers investigated data gathered from tracking devices on the manta rays, as well as chemical and DNA analysis of the rays' muscle tissues. The scientists were surprised to find that these giants of the deep are not long-distance seasonal commuters at all. Rather, they spend their lives in much more localized areas, the researchers found. The discovery radically changes scientists' understanding of mantas' habits and carries dramatic implications for their conservation. [Watch 'Homebody' Manta Rays Get Tagged]

Now you see them, now you don't

With a "wingspan" that can extend more than 23 feet (7 meters), mantas are the largest rays and one of the ocean's biggest fishes. But tracking even very large animals in the open ocean can be extremely difficult, and mantas have always been especially so, according to lead study author Josh Stewart, a graduate student at the Scripps Institution of Oceanography in San Diego.

"They live in hard-to-reach places — and in a lot of these places, it's challenging to find them consistently. So for a long time, no one was tagging them," Stewart told Live Science.

Stewart, who is also the associate director of the nonprofit conservation organization Manta Trust, explained that individual mantas can be identified by unique patterns of spots on their bellies; photos of mantas captured by researchers, dive tours and citizen scientists were used to track mantas over time.

But sometimes, nearly two decades would elapse between sightings, Stewart said. And in some locations, researchers would see the mantas for a few weeks or months, but they wouldn't find any at all for the rest of the year. And because mantas are so big, it was thought that they were simply doing what large migratory ocean creatures such as whales, leatherback turtles and bluefin tuna do — following their food.

"If you look at every other big animal that lives in remote pelagic [open ocean] environments, they're making long, epic migrations," Stewart said. "So we thought the mantas were migratory, too. They're certainly big enough and capable enough."

The researchers set out to tag and sample manta-ray populations at four sites that were up to 8,000 miles (13,000 kilometers) apart, to find out how far the rays traveled.

Tagging technology has been used by oceanographers for more than two decades, but recent innovations have made devices much more robust and reliable, with a recovery rate of 80 to 90 percent, Stewart said.

The tags were programmed to detach after six months and then float to the ocean surface, where scientists could retrieve them.

In the very first batch they collected, Stewart and his colleagues noticed something unexpected: The tags popped off within about 62 miles (100 km) from where they were originally attached, and when the scientists mapped the mantas' movements over months, they found that the tags remained in largely the same area.

Stewart said their initial reaction was, "Well, that's interesting," though they needed to collect more data to be sure. But every tag they deployed after that returned the same results over a six-month period. And their genetic analysis confirmed that mantas in the different sample sites were not, in fact, the same individuals traveling from place to place, but rather established groups that staked out their ranges and stayed put. [Marine Marvels: Spectacular Photos of Sea Creatures]

So why don't mantas seasonally roam the oceans as other massive predators do? Greater flexibility in their diet might be the answer, Stewart suggested.

Mantas were known to feed primarily on tiny marine organisms called zooplankton, filtering them from seawater with specialized gill plates, but tissue analysis of the rays revealed that their diets are broader than scientists had expected.

"They can feed on everything from really tiny copepods that you can barely see to big shrimp, and even fishes," Stewart said. "We think they're able to shift what they're feeding on at different times of the year, which may allow them to stay put and not migrate."

Recognizing that mantas are local and affected by smaller groups of people could shift conservation efforts to local communities — which tend to be more effective, Stewart said.

On the other hand, he added, mantas that don't stray as far are more likely to be negatively affected by activities from local fisheries and poaching for the illegal wildlife trade.

"It's a double-edged sword," Stewart told Live Science. "It's good in terms of facilitating management. But it also means we have to act much more quickly, because these populations are more vulnerable due to their restricted ranges."

The findings were published online today (June 20) in the journal Biological Conservation.