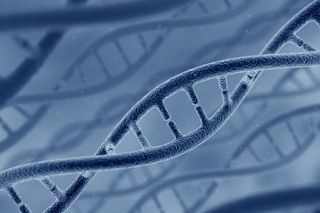 Two graduate students developed a method for synthesizing DNA that could make it much faster, cheaper and easier for biologists to create synthetic DNA sequences.

Right now, if you want to create a new gene — maybe to make a tomato plant more bug resistant or to add a modification to your army of supersoldier goats — the process is slow and expensive. Bases, the building blocks of genetic code, get added one at a time to a growing strand of DNA. The process sometimes fails, and it always runs out of juice once a sequence reaches just 200 bases (a very short patch of code in genetic terms), according to a statement from the researchers.

Want to go longer? Better to write lots of different bits of genetic code and then stitch them all together using enzymes — chemicals that living things produce to help along the chemical reactions in their bodies — even knowing how likely that is to fail. The new method, which the students published Monday (June 18) in the journal Nature Biotechnology, could eliminate many of those problems. [Genetics by the Numbers: 10 Tantalizing Tales]

The old method for synthesizing DNA dates to the 1970s. It's a slow, cumbersome process that slows down genetics labs even as new technologies, like CRISPR, speed up other parts of the gene-editing process.

This new method, developed at the Lawrence Berkeley National Laboratory, takes a brute force approach: Enzymes physically bind each new bit of DNA to the sequence, before getting shorn off the sequence and discarded. This is a process that could in principle go on forever, without an arbitrary cut-off at 200 bases.

It does use up a lot of enzymes, the researchers said in their statement. But, fortunately, enzymes are cheap. The researchers said they initially had some trouble convincing other biologists that the idea would work, though, because researchers just aren’t accustomed using enzymes to directly bind DNA together.

Hacking together DNA sequences with the new, brute-force approach could one day become the norm in genetics labs, the researchers said. But the technology isn't there yet. This method is still more prone to failure than standard genetic-sequencing techniques, and it hasn't reached its top speed yet. Down the line though, the students said they expect to catch up with and surpass current sequencing methods and perhaps one day manage to write whole new artificial genes overnight.

Editor's note: This story was updated to correct a description of the role enzymes play in the old method of synthesizing DNA. They're used to stitch together sequences, but not in the DNA synthesization process itself.