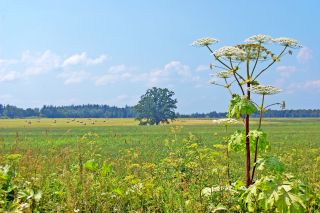 The giant hogweed (Heracleum mantegazzianum) is a towering weed that can cause vision loss and intense burns. But no, this poisonous plant doesn't come from Professor Sprout's botany syllabus at Hogwarts; instead, it's very real and was recently identified in Virginia, according to news reports.

A Virginian came across the giant plant and suspected that it could be bad news. So, he contacted local experts about it, including Jordan Metzgar, a curator with the Virginia Tech Massey Herbarium who helped identify the plant.

Sure enough, the towering weed — which can grow to over 14 feet (4.3 meters) tall and is topped with white flowers — turned out to be a giant hogweed. Though this was the first time the invasive plant was identified in Virginia, giant hogweed has already established a home across many parts of the mid-Atlantic, Northwest and New England regions; there are at least 400 giant hogweeds in 239 sites across New York alone, according to the New York State Department of Environmental Conservation.

But what makes this plant so dangerous?

"The [plant's] sap is toxic and basically strips the body's ability to control the UV radiations from sunlight," said Joellen Lampman, an educator with the New York State Integrated Pest Management program at Cornell University. Without this ability, a person is much more susceptible to sunburns. [Naughty by Nature: The Most Disgusting and Deadly Flowers]

In particular, the sap contains compounds called "photosensitizing furanocoumarins," Lampman told Live Science. Sunlight activates these compounds, which can lead to severe burns on a person's skin, according to Metzgar. The burns can worsen with moisture like from sweat or dew and heat, according to the New York State Department of Environmental Conservation (NYSDEC).

The medical term for this type of burn is "phytophotodermatitis," a skin condition caused by extreme sensitivity to sunlight. "It's pretty horrific," Metzgar told Live Science. "It causes pretty severe burns …  worse than [the typical] sunburn."

Phytophotodermatitis can also cause rashes, painful blisters, scarring and long-term sensitivity to sunlight, Lampman said. And if the sap gets into the eye, the toxins lead to vision loss.

"The recommendation is that if you think you've come into contact with [a giant hogweed] to wash with soap and water as soon as possible … stay out of the sun for 48 hours and see a physician," Lampman said.

"What's really scary about this one is the impacts it could have on children," Lampman said. "It … kind of looks like an umbrella, so you can envision children seeing that and breaking [the plant] off and carrying it around with them." But this would expose kids to the sap, she added.

People can encounter the sap all over the plant, but they primarily come into contact with it by breaking the plant's stem or leaves or even by touching its bristles, according to the NYSDEC.

Because of this, Lampman said that people should not try to get rid of the plants on their own, as this could expose them to the toxic sap. Instead, if you think you've seen a giant hogweed, Lampman recommends that you contact your state's department of environmental conservation, who can remove it. According to the NYSDEC, you should not use a "weed whacker" or brush cutter to get rid of the plant, as it could lead to sap spreading.

Metzgar noted that not every towering, scary-looking plant is a giant hogweed. Indeed, a native species called cow parsnip looks a lot like the giant hogweed and is much more widespread.

"If you're out and see a giant plant with white flowers, it's a good chance it's a cow parsnip," Metzgar said. Still, you should take some photos and report it to local agencies, he added. "You don't need to panic right away."