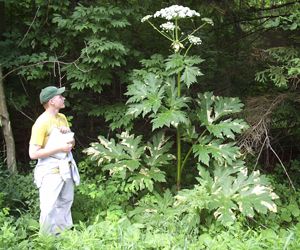 Giant hogweed might sound like something out of Harry Potter, but it's straight out of New York. This noxious weed has spread across the state, threatening humans with sap that causes severe burns, blistering, permanent scarring and even blindness.

The outbreak has grown so bad that the N.Y. Department of Environmental Conservation (DEC) has issued a giant hogweed warning and set up a hotline.

Giant hogweed is native to the Caucasus region of Eurasia, and was brought to the United States in the early 1900s. The gargantuan plant blooms bunches of tiny white flowers the size of umbrellas, which made it a showpiece in ornamental gardens, including one in Rochester, N.Y. In the century since it was planted there, it has spread across the state, with 1,004 confirmed sightings so far this blooming season.

In the words of Charles O'Neill, coordinator of the Cornell Invasive Species Program, hogweed is like "Queen Anne's lace with an attitude." Specimens of the megaflora grow "more than 10 feet tall with two-inch thick stems, flowers two or more feet across and leaf clusters as wide as you can stretch your arms," O'Neill explains in the New York Sea Grant's official giant hogweed fact sheet.

If you see it, "stay clear!" O'Neill warns. Hogweed is New York's most striking, dangerous and invasive plant, and its sap "can make a case of poison ivy seem like a mild itch." [Gross Image: Click to see a hogweed sap burn ]

"If the sap gets on your skin and it's exposed to sunlight ... you end up with third-degree burns, oozing and scars," Naja Kraus, the DEC's giant hogweed program coordinator, told the press. "If it gets in your eyes, you can go blind."

The DEC urges people to phone the Giant Hogweed Hotline to report finding a specimen of the dangerous plant. They'll immediately dispatch a crew to dispose of it.