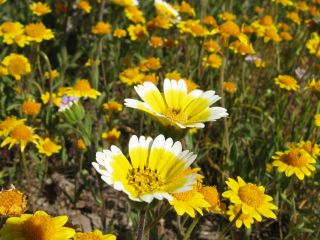 California native annual plants, such as the ones pictured here, are under threat from invasive species.
(Image: © Benjamin Gilbert)

Invasive species are winning in the battle for survival against some native plants in a California reserve, according to a new study.

The research has troubling implications for plant hardiness, the scientists studying the plants said. While some researchers have believed the invaders merely supplement the native ecosystem, the new findings, published online earlier this month in the journal Proceedings of the National Academy of Sciences, show that a few of the original plants could die out in a few hundred years.

"What we see is a serious invasion, meaning that as one or more invasive species start to become abundant, the native plants shrink down in their habitat," said ecologist Benjamin Gilbert, who did field research during a temporary appointment at the University of California. He is currently with the University of Toronto.

Among other experiments, Gilbert and co-author Jonathan Levine planted plots of several native species, including the native flower Lasthenia californica, at the Sedgwick Reserve in the Santa Ynez Valley near Santa Barbara. Researchers then observed the plants' growth and modelled the long-term trend for the plants' survival based on the experimental results.

In general, Levine and Gilbert noted that the seedlings did not do very well in areas dominated by "exotic" grasses, such as Avena fatua, and that the population sizes of the native species are shrinking to critical levels.

Researchers have found that the number of total species in an area increases as exotics take hold and natives cling on to life. However, the native species are restricted to small "refugia," or isolated populations, located far apart from each other, which could hurt their long-term survival, Gilbert said.

Such isolated patches make the plants are more susceptible to damage frombeing hurt by disease or fire; plus, it's harder for them to disperse seeds.

"The native species are pushed out of the best habitat," Gilbert told OurAmazingPlanet. "The analogy for people is being taken off a really good diet — it's getting them by, [but] it's not optimal."

Native species that have adapted to more challenging environments, such as rocky conditions, tend to fare better. "In this case, the only reason the natives seem to do well in these patches is it is so crappy for the invasives," Gilbert said.

As for protecting the native species, pesticides sometimes do more harm than good. It might be more effective, Gilbert suggested, to create a "corridor" of suitable habitat between patches of native species, which would help them again colonize larger areas.

One challenge, though, is that most of the native species develop naturally in small areas, although the invasives push them to sites that are much smaller than usual. This makes it difficult to study the impact of invasive species or to encourage the natural grasses and flowers to expand their habitats.