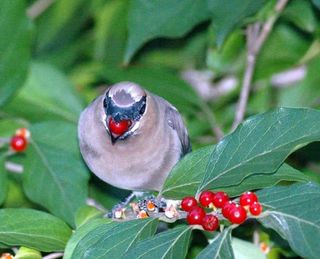 The fruit of the honeysuckle
(Image: © Tomás Carlo, Penn State.)

Invasive plant species can sometimes be a force of good in the ecosystems they infiltrate, according to new research. The finding turns the traditional view that invasive species are destructive on its head.

"Among conservation biologists, ecologists and managers, the default approach is to try to eliminate and root out non-native, invasive shrubs anything that seems to change an ecosystem ," said Tomás Carlo, one of the Penn State biologists who conducted the study.

However, Carlo said, most ecosystems have been so vastly changed by human intervention that returning them to their original state is difficult, since many native plant species have become rare.

"We wondered: Are we sometimes doing more harm than good when we eradicate plants that, despite being introduced recently, have formed positive relationships with native animals?" Carlo said.

To find out, Carlo and fellow researcher Jason Gleditsch, a Penn State graduate student, sectioned off an area of central Pennsylvania known as the Happy Valley region, where honeysuckle a non-native fruiting plant that is considered invasive grows in abundance.

They found that the invading honeysuckle and the local bird population had formed a mutually beneficial relationship : the honeysuckle provides food for the birds, and the birds â?? via their feces â?? disperse seeds for the honeysuckle , helping it to spread.

Carlo explained that returning this particular ecosystem to its honeysuckle-free state could harm many species of native birds that now seem to rely on honeysuckle as a major food source.

Carlo said that Pennsylvania's population of fruit-eating birds, such as robins and catbirds, is three or four times higher than just 30 years ago, especially in landscapes with high human populations. He said the change suggests that while some invasive, human-introduced plants are definitely problematic, others could serve to restore ecological balance by providing food to native migratory birds that live in areas affected by humans.

Finally, destroying invasive species can eat up tax dollars, and is often ineffective in the long run, Carlo said. The invaders tend to just keep growing back.

"Nature is always shifting and readjusting as new relationships form between species, and not all of these relationships are bad just because they are novel or created by humans," Carlo said.

"We need to be more careful about shooting first and asking questions later -- assuming that introduced species are inherently harmful," Carlo said. "We should be asking: Are we responding to real threats to nature or to our cultural perception and scientific bias?"