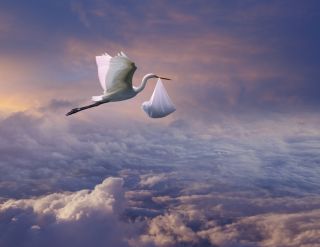 Newborn babies are often depicted with a rather incongruous creature: a long-legged, sharp-beaked bird known as a stork. The image of this bird — usually with a cloth bundle dangling from its beak — has become so intertwined with infants that we barely question the stork's ubiquitous presence on well-wishers' cards, baby clothes and blankets.

But what's actually behind this association between storks and babies?

Like any myth, its origins are hard to trace, especially since this one spans the globe, appearing in folklore from Europe, the Americas, North Africa and the Middle East. The array of similar myths suggests that they all draw common inspiration from the birds' most noticeable features. [Why Are Human Babies So Helpless?]

"The birds are big and white — linked to purity — and their nests are large, prominent and close to where people live. So, their good parenting behavior is highly evident," explained Rachel Warren Chadd, co-author of "Birds: Myth, Lore and Legend" (Bloomsbury Natural History, 2016).

Many popular accounts trace the myth back to ancient Greece and the story of a vengeful goddess named Hera. According to this story, Hera grew jealous of a beautiful queen named Gerana and transformed her into a stork. The heartbroken Gerana then sought to retrieve her child from Hera's clutches, and the Greeks depicted the transformed bird with a baby dangling from its beak.

But, when doing research for her book, Warren Chadd discovered that the original myth actually describes the baby-snatching bird as a crane, not a stork. "It can be difficult to verify that one species is associated with an ancient myth as, for instance, storks, cranes and herons were often confused," Warren Chadd told Live Science. Similarly, in Egyptian mythology, storks are associated with the birth of the world. But historically, that legendary creature was actually a heron: "A small stretch of imagination might make that a stork," Warren Chadd said.

Paul Quinn, a lecturer in English literature at the University of Chichester in the United Kingdom and editor of a research journal about folklore and fairy tales, speculated that the link between storks and babies may boil down to this species confusion. "I think the connection of the stork with infants, particularly maternal care of children, is the result of the conflation of the stork with the pelican," he told Live Science. European medieval literature associates the stately white pelican with Catholicism, rebirth and the rearing of young, he said. Somewhere along the way, storks may have become a substitute for this bird.

Whatever the origins of the myth, historians tend to agree that the idea of the baby-bringing stork was most firmly established in northern Europe, particularly Germany and Norway. During the Pagan era, which can be traced back at least to medieval times more than 600 years ago, it was common for couples to wed during the annual summer solstice, because summer was associated with fertility. At the same time, storks would commence their annual migration, flying all the way from Europe to Africa. The birds would then return the following spring — exactly nine months later.

Storks "would migrate and then return to have their chicks in spring around the same time that a lot of babies were born," Warren Chadd said. Thus, storks became the heralds of new life, spawning the fanciful idea that they had delivered the human babies. [Why Pregnancy Really Lasts 9 Months]

As the story evolved over time, its complexity grew. In Norse mythology, storks came to symbolize family values and purity (based largely on the inaccurate belief that these birds were monogamous). In the Netherlands, Germany and eastern Europe, storks nesting on the roof of a household were believed to bring good luck — and the possibility of new birth — to the family below, Warren Chadd wrote in her book.

Although Europe was the epicenter of the myth, it took shape in the Americas too, she told Live Science. "It is interesting that the same story occurs in Sioux legend with a different type of stork, the wood stork [Mycteria americana], as opposed to the white stork [Ciconia ciconia]," she said. "They all arise from different people's observation of behavior wherever storks — particularly white storks — can be found."

Then, in the 19th century, the myth gained new traction as a symbol of birth, when it was popularized by Hans Christian Andersen in his version of the fable, called "The Storks." In this tale, these birds plucked dreaming babies from ponds and lakes, and delivered them to deserving families. The story had a dark underside, however: Families with ill-behaved children would receive a dead baby as punishment from the stork.

The tale sought to teach children a moral lesson and also kept with the new tradition of "'infantilizing' fairy tales — the growth of a specific literature for children, frequently didactic and religious in intent," Quinn said.

In Victorian England, the story became especially valuable as a way of obscuring the realities of sex and birth. "For Victorians embarrassed about explaining the facts of life, the stork bringing a baby was a useful image — modesty to the point of prudishness," Warren Chadd said.

Views on childbirth may be less prudish today, but we still hang on to the stork myth, celebrating the graceful bird and its central role in family life. "People love stories," Warren Chadd said. Our tendency to humanize animals has made the baby-delivering stork one of our most enduring myths, she added, "loosely based on the birds' behavior but also rooted in human hopes and fears."