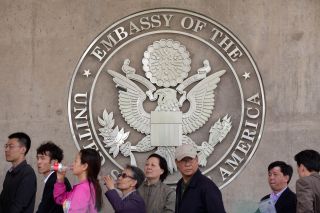 People queue outside of the US embassy in Beijing, China. This week, at least two Americans were evacuated from nearby Guangzhou after showing mysterious neurological symptoms.
(Image: © Ed Jones/AFP/GettyImages)

A medical mystery deepens in China.

On Wednesday (June 6), a U.S. government employee and his family were evacuated from the city of Guangzhou in order to receive medical testing for unexplained neurological symptoms, a State Department spokesperson said.

The departure comes two weeks after another government employee was evacuated from the city after experiencing mysterious symptoms that have been likened to the so-called "sonic attacks" that afflicted U.S. embassy workers in Cuba last year. The Guangzhou employee "reported subtle and vague, but abnormal sensations of sound and pressure," according to a statement from the U.S. Embassies and Consulates in China, and was later diagnosed with mild traumatic brain injury, the BBC reported. Additional medical tests were administered to U.S. government employees in China following the first employee's evacuation, which resulted in several more individuals being diagnosed this week, the State Department said.

It's not clear exactly how many Americans showed neurological symptoms or were evacuated on Wednesday, but the State Department said "a number of individuals" had been brought home for further medical testing. At least one of the evacuees worked for the American Consulate in Guangzhou, The New York Times reported.

These cases in China have expanded a medical crisis that began in Cuba in 2016, when a number of U.S. embassy employees reported hearing loud, bizarre noises and subsequently reported severe neurological symptoms. After hearing the noises, a total of 24 of these employees and their family members were stricken with mysterious headaches, hearing loss, dizziness and, ultimately, brain damage. Ten Canadian diplomats were also evacuated from the island, showing similar symptoms, the Associated Press reported.

The U.S. government has characterized these incidents as deliberate sonic "attacks" on embassy workers by unknown actors. A report published in February in the medical journal JAMA disputed the theory that a sonic weapon was to blame, but could not pinpoint an alternative explanation for the mysterious symptoms.

In a statement on Tuesday (June 5), U.S. Secretary of State Mike Pompeo said that he had created a health care task force to deal with "the unexplained health incidents that have affected a number of U.S. government personnel and family members stationed overseas,” The New York Times reported. Whether other embassy employees working outside of Cuba and China have experienced similar symptoms was not clear.