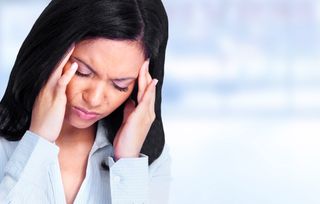 Many people who experience migraines may not be taking advantage of behavioral treatments for the debilitating headaches, even if doctors recommend these beneficial methods to patients, a new study suggests.

Behavioral treatments for migraines include so-called mind-body methods, such as cognitive behavioral therapy and relaxation techniques.

In the new study, researchers found that only about half of migraine patients who were referred by a headache specialist for behavioral therapy actually scheduled a first appointment, according to the findings, which were published today (June 5) in the journal Pain Medicine. [Ouch: 10 Odd Causes of Headaches]

A lack of time was the top reason that people gave for not making the initial appointment, said lead author Dr. Mia Minen, a neurologist and the director of headache research at NYU Langone Health in New York City. Such time-related obstacles included an inability to take time away from work and family obligations that prevented them from attending weekly behavioral therapy sessions, and the time and effort requirements for obtaining health insurance coverage, she said.

Cost concerns and skepticism about whether behavioral therapies would work were other common reasons that people with migraines may have skipped these treatments, the study found.

Studies have shown that people who participate in behavioral therapies alone — without taking medication — may achieve a 50-percent reduction in the number of days they are affected by the headaches, Minen said.

So, how do these treatments work?

Cognitive behavioral therapy can teach people how their thoughts and behaviors can affect their perception of pain, according to the Mayo Clinic.

Relaxation techniques may help ease stress, which can trigger migraines, the Mayo Clinic says. These techniques include deep breathing exercises, meditation and progressive muscle relaxation, which is a sequential tightening and loosening of muscle groups typically done from the toes up to the head.

Biofeedback is a technique that involves hooking a person up to electronic sensors that monitor biological functions, such as changes in skin temperature or heart rate. Receiving this feedback from the body can help someone with migraines learn how to make small changes, such as relaxing certain muscles, as a way to reduce pain.

It's crucial to increase the use of safe, medication-free treatments for people who get migraines, especially in light of the current opioid epidemic in the U.S., Minen said. In a previous study that she conducted, she and her colleagues found that one-fifth of the patients at a headache center were taking opioids for pain relief, and most were migraine patients. [America's Opioid-Use Epidemic: 5 Startling Facts]

Minen noted that although many people take preventive medications for migraines, the long-term side effects of these drugs are not known because many are relatively new and haven't been around very long. (Some drugs that are used as preventive medications include beta-blockers, anti-seizure drugs and even Botox, according to the Mayo Clinic.)

In addition, migraines affect 18 percent of women in the U.S., many of whom are still fairly young and may also be in their childbearing years when taking preventive medications, which may have effects on the fetus, she said.

Behavioral therapies, on the other hand, don't have the negative side effects of migraine medications and are safe during pregnancy, Minen said. So, in the new study, the researchers wanted to find out why more people with these debilitating headaches were not using these treatments.

In the study, researchers surveyed more than 230 patients with migraines who went to a headache center at a large teaching hospital. After seeing a headache specialist, about 30 percent of patients were referred for behavioral treatment. (The referral did not specify the type of behavioral therapy needed, and treatment decisions were made by the behavioral therapist.) [5 Surprising Facts About Pain]

Slightly more than half of the patients referred (57 percent) set up a first appointment with a therapist who had training in migraines, according to the study. The findings also showed that people who had seen a therapist for migraines in the past were more likely to arrange an appointment for behavioral treatments than those who had not seen a therapist.

People who had previously seen a therapist may have a better understanding of what occurs during behavioral therapy, Minen said. They may also feel less stigma about seeing a therapist and could have greater self-awareness of how certain factors, such as stress or abnormal sleep schedules, may affect their migraines, she added.

One of the limitations of the study is that it looked only at whether migraine patients booked a first appointment for behavioral therapy and not at whether someone actually showed up for the session or made additional therapy visits. Another drawback of the study was that it surveyed only people at one New York headache center, and thus the findings may not apply to people in other settings.