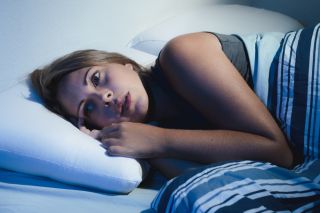 For people with insomnia, help falling asleep may soon be available online: A recent clinical trial found that a web-based course of treatment for insomnia was effective at helping people get more sleep.

Compared with people in the study who received no therapy, those who participated in the online treatment group fell asleep faster, woke up fewer times during the night and reported less severe insomnia after completing the treatment, according to the study.

The type of therapy, called cognitive behavioral therapy for insomnia (or CBT-I), is considered to be a "first-line" recommendation for people with chronic insomnia — that is, insomnia that lasts longer than one month. The therapy focuses on changing how people think about their insomnia, by addressing "the problematic thoughts and behaviors believed to have developed in response to acute insomnia," according to the study, which was published in November 2016 in the journal JAMA Psychiatry.

Millions of people in the U.S. have insomnia, but there are few clinicians who are trained to provide CBT-I, the researchers said. So researchers have been looking into the effectiveness of online versions of this particular treatment. [7 Strange Facts About Insomnia]

In the study, 303 adults with chronic insomnia were assigned to either a therapy group or a control group. The therapy group completed a six-week interactive therapy program online, in which they logged on a few times a week, and read and did homework assignments, while the control group was given access to a website with information about insomnia.

The people in the study responded to questionnaires about their insomnia and also kept sleep diaries during the study period. After nine weeks, the people in the therapy group reported greater improvements in their sleep than those in the control group, the researchers found. And after both six months and one year, the improvements remained, according to the study.

For example, the researchers found that after one year, 70 percent of the people in the therapy group were considered to be "treatment responders," meaning that the severity of their insomnia decreased by at least 7 points on a questionnaire called the Insomnia Severity Index (ISI), which measures insomnia severity on a 28-point scale. In the control group, on the other hand, 43 percent of the people were found to be treatment responders, the researchers found.

The findings suggest that internet-based CBT-I "could reach previously unimaginable numbers of people," according to the study authors, led by Lee Ritterband, a professor of psychiatry and neurobehavioral science at the University of Virginia School of Medicine.

The authors noted, however, that future studies are still needed to determine for whom this type of therapy would work best. One limitation of the study was that the participants were primarily white and well-educated, the researchers wrote.