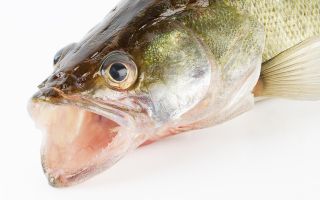 Is a dead fish art, or an explosion waiting to happen? In this case, it was both.
(Image: © Shutterstock)

Something was rotten in a London art gallery last week — an installation of sequin-embroidered decomposing fish sealed in clear plastic bags.

But before the exhibit even opened, the malodorous artwork unexpectedly combusted and set fire to the gallery.

The installation — a piece called "Majestic Splendor" by Lee Bul — was part of an exhibition of the Korean artist's work, scheduled to open at the Hayward Gallery on May 30. Then, hours before the show's first preview, the gassy art blew up, causing a fire that damaged part of the gallery, artnet News reported. [Top 10 Greatest Explosions Ever]

Even though the exhibit was not yet open to the public, gallery officials had already decided to remove "Majestic Splendor" from the show for safety reasons. They had learned earlier that a chemical added to the fishes' bags to dampen their smell could become flammable after combining with gases released by the decomposing flesh, and art handlers were taking down the art as a precaution when it suddenly combusted and sparked a fire, a gallery spokesperson told frieze magazine.

"Majestic Splendor" previously raised eyebrows — and wrinkled noses — when it was presented at The Museum of Modern Art (MoMA) in New York City in January 1997. Dozens of small, transparent bags were fixed to a wall; each contained a rotting fish decorated with stitched-on sequins and beads, representing Bul's scathing commentary on the fleeting nature of beauty for highly ornamented women, according to the 1997 MoMA exhibition catalog.

But after a custom-designed refrigeration unit for the MoMA installation failed, the smell was so awful that museum officials nixed the display and removed it, and subsequent showings included an odor-reducing chemical known as potassium permanganate, the Guardian reported.

As fish decay, they emit amines — compounds of carbon, hydrogen and nitrogen — which produce odors that are intensely powerful and distinctively "fishy," Preston MacDougall, a professor with the Department of Chemistry at Middle Tennessee State University, told Live Science in an email.

But these compounds aren't just smelly — they're also potentially explosive. Certain molecular bonds connecting hydrogen and carbon can release a lot of energy when vaporized — in gasoline, high-energy bonds in hydrocarbon molecules give the fuel its kick (and make it highly flammable). Similar energy reserves lurk in the molecular bonds of hydrogen and carbon compounds produced by decomposing fish, creating the possibility of an explosion under the right conditions, MacDougall explained.

For the new show and for previous installations after the MoMA debacle, potassium permanganate — also known as KMnO4 — was added to "Majestic Splendor" to reduce the smell of the rotting fish. In fact, KMnO4 is a time-honored choice for masking strong odors, Raychelle Burks, an assistant professor of chemistry at St. Edward's University in Austin, Texas, told Live Science in an email.

But when combined with combustible material, KMnO4 is known to trigger violent explosions under certain circumstances, she added. It's possible that the compounds produced by the putrefying fish interacted with KMnO4 to spark combustion, but it's also likely that the explosion was caused by pressure buildup from trapped gases that had nowhere to go, similar to the effect that causes beached and bloated dead whales to explode, Burks told Live Science.

After the gallery incident, firefighters quickly put out the blaze, and a security guard was treated for smoke inhalation; damage to the Hayward Gallery from the fire was "superficial" and contained in one small section of the exhibit space, according to artnet News. The exhibit, titled "Crashing," opens today (June 1) and will run through Aug. 19 — minus the malodorous and volatile fish display.