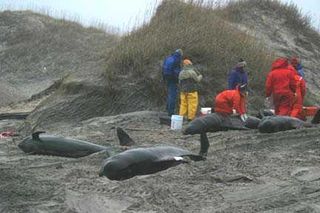 As the effort to coax the surviving members of the more than 70 beached whales in New Zealand back out to sea continues, the event has brought to light the puzzle marine biologists face in trying to determine what causes mass whale strandings.

The whales stranded in northwest Auckland are pilot whales, which are known as one of the most common whales to beach themselves, according to Scott Baker, marine biologist and professor at the Marine Mammal Institute at Oregon State University.

Researchers have several theories to explain why some whales, which are expert navigators by nature, strand themselves in shallow water and on beaches. Strandings can involve a lone whale or a whole pod, and some even appear to be intentional.

The mystery is becoming an increasingly important one to solve, because large pods of stranded whales are becoming more common, especially among beak nose whales, Baker said.

Some researchers and environmentalists argue that underwater sonar pulses startle and disorientate whales, possibly scaring them into seeking safety in shallow waters. Beak nose and melon-headed whales may be particularly affected by the mid-frequency sonar waves that the U.S. Navy uses to detect submarines, according to the National Oceanic and Atmospheric Administration (NOAA).

A 2001 study conducted by the Bahamas Marine Animals Research Organization found a correlation between mass strandings of beak nose whales in the northern Bahamas and naval sonar maneuvers in the area.

The Natural Resources Defense Council and other environmental groups settled a lawsuit against the Navy in 2008, and the Navy agreed to further investigate how sonar technology affects whales and other marine mammals. Previous lawsuits in California and Hawaii led to the federal courts ordering the Navy to curb its use of sonar.

However, scientists have yet to determine exactly how sonar pulses disturb or harm whales, or why they affect certain species more than others.

Individual whales may beach themselves for a host of reasons. Genetic mutations, illnesses from infections or parasites, injuries from predators or entanglements in fishing gear and old age may all play a role, according to cetacean science researchers at Whitehead lab at Dalhousie University in Nova Scotia.

But the reasons behind group strandings are more mysterious, Baker said.

"Mass strandings are an interesting problem," Baker told Life's Little Mysteries. "The cause of a group stranding is often hard to determine because it is difficult to study the behavior of whales pre-stranding."

One hypothesis is that a pod of whales may accidently strand themselves when attempting to come to the aid of a beached whale that is sending out distress calls. However, because most stranded whales are in poor shape by the time marine-life rescuers reach them, it's hard to determine if only one whale was originally in danger, Baker said.

Nutrient deficiencies, disorientation and weakness brought on by a lack of food at whales' feeding grounds may bring whales into shallow waters. They may follow prey (or be attempting to escape predators) into shallow waters, according to Whitehead lab.

Rough weather, water pollution (such as oil spills) and environmental toxins are other possible causes put forth by researchers. Poisonous red tides, which occur when microscopic algae rapidly bloom and release toxins, not only affect whales but also filter-feeding shellfish and other parts of the marine food chain, according to NOAA.

Another theory is based on the social bonds and kinship within a pod. Most whale species travel in groups as a survival strategy, with dominant whales leading the pod. If the dominant whale becomes sick or confused, it may lead the pod too close to shore, where they can become trapped by a low tide, according to "Whales" (Capstone Press, 2005).

The largest reported stranding of a single whale species occurred in 1946, when 835 false killer whales stranded themselves near the city of Mar del Plata in Argentina, according to the "Encyclopedia of Marine Mammals" (Academic Press, 2009). The cause of the massive beaching was never determined.

"There are lots of reasons for group strandings, but no agreements," Baker said.