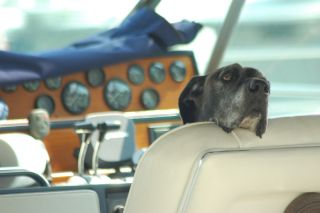 At the end of the Oscar-winning documentary "The Cove," former dolphin trainer Ric O'Barry claims that a dolphin he worked with jumped out of the water and "committed suicide in my arms." Animals such as primates, dolphins and even squid have been shown to have self-awareness, but can they actually make a choice to kill themselves? Or is that particular trait reserved for humans?

Traditionally, it has been assumed that suicide was only for humans, said Duncan Wilson, a research associate at the University of Manchester in the United Kingdom. "Lacking the capacity to visualize and enact their own deaths, animals are seen to be driven by an instinct of self preservation," he said.

But these values reflect those of society at a certain time, Duncan said. For example, there was a spate of articles in the late 1800s about animal suicides, including dogs who dragged themselves to the graves of their masters to die, a cat that hung herself after her kittens died, and horses who would kill themselves after years of maltreatment. There is even a famous bridge in Scotland where dogs have been throwing themselves to their death for years.

The picture quickly gets complicated, though. For an act to be classified as a suicide, the agent must know that what it is doing will end its life. That kind of abstract thinking is probably out of the range of animals — even advanced ones.

It's more likely that animals will inadvertently terminate their own lives when depressed or lonely. Highly bonded animals change their behavior when they lose a companion. For example, dogs in such situations sometimes go into depression and reject food and attention until they eventually die. The inactivity caused by depression is not the same as suicide, even though it may lead to death.

Self-destruction in the natural world is fairly common. Thomas Joiner of Florida State outlines some examples in his book "Myths about Suicide" (Harvard University Press; 2010). He points out that pea aphids will literally blow themselves up when threatened by a lady bug, scattering and protecting their brethren and sometimes even killing the lady bug. While this may not be suicide in the human sense, it shows how preservation of the community may mean destruction of the individual.