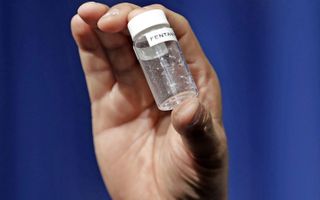 A reporter holds up a container with the amount of fentanyl that could kill a person at a 2017 news conference in Arlington, Virginia.
(Image: © Jacquelyn Martin/AP/Rex/Shutterstock)

California has spent $57,000 in the past year on fentanyl drug tests, according to news reports. But the test isn't being used to determine whether a person has been exposed to the drug. Rather, it's to test other drugs for the presence of fentanyl.

Fentanyl is a notoriously potent synthetic opioid that's 50 times stronger than heroin, according to the Los Angeles Times. Deaths specifically from synthetic opioids, including fentanyl, doubled from 2015 to 2016, Live Science reported in March.

As such, scientists and public health workers are concerned about the increasing prevalence of fentanyl in other drugs, such as heroin and cocaine. What's more, most people who use drugs laced with fentanyl don't realize that there is fentanyl in them, the LA Times reported.

Enter the fentanyl test strips. These strips were first designed to test for the presence of the drug in a person's urine. But for the past year, California has been distributing the tests for a different purpose: to test for the opioid in other illegal drugs. [America's Opioid-Use Epidemic: 5 Startling Facts]

Fentanyl test strips have been increasing in popularity nationwide, and in May 2017, the California Department of Public Health began paying for test strips that could be distributed to drug users at needle exchange centers, the LA Times reported. The strips cost only a dollar each and work by being dipped into a small mixture of water and the drug being tested.

But some experts are wary of the accuracy and mass distribution of the test strips, which haven't been approved by the U.S. Food and Drug Administration for this specific purpose, according to the LA Times.

Others are concerned that the tests may give a false negative (meaning they say there's no fentanyl present when there actually is), but a John Hopkins University study from February showed that the strips could detect the presence of fentanyl nearly 100 percent of the time. The same study found that if drug users knew their drugs were laced with fentanyl, 70 percent of them would change their behavior — for example, by not taking the drug or buying drugs from someone else.