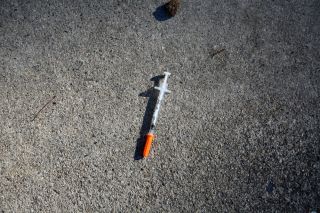 Every day, an estimated 300 to 520 people in the U.S. try heroin, according to the Substance Abuse and Mental Health Services Administration. But how many people who try the drug end up dependent on it?

Previous studies estimated that, among those who have used heroin at least once in their lifetime, 20 to 25 percent develop a dependence on the drug.

But this rate may be higher than previously thought, according to a new study published May 30 in the journal JAMA Psychiatry. The new study found that about 30 percent of new users becomes dependent on the drug approximately one to 12 months after using it for the first time. [America's Opioid-Use Epidemic: 5 Startling Facts]

These new estimates are especially precise, according to senior study author James Anthony, a professor of epidemiology and biostatistics at Michigan State University who has been studying drug dependence for over 40 years.

Previous studies, for example, looked at heroin users from the onset of their drug use through the remainder of their lifetimes. The new study, however, assessed participants just one year after they started using heroin. This immediacy makes it less likely for subjects to die or be imprisoned during the study period, which would have taken them out of the study population, and also "determines just how quickly dependency forms," Anthony said.

"In this new study, we took into account that there are certain [heroin] users who move out of the population we study," Anthony told Live Science. "Other estimates are slightly biased, because they leave out certain users."

In the study, the researchers looked at data from 2002 to 2016 from the National Survey on Drug Use and Health (NSDUH), an annual survey on drug use and drug dependence in the U.S. Because the survey asks participants about their use of the drug only within the past year, rather than the past 30 years, it's "easier for participants to be accurate with their answers," Anthony said.

From the NSDUH data, the researchers identified more than 1,000 new heroin users and found that, overall, about 30 percent of new users developed a heroin dependence.

These rates weren't steady over the course of the study period; they've increased over the past few years. As the "purity of heroin increases," Anthony said, "[the] price of the drug decreases, and opioid use expands."

He noted, however, that the researchers weren't able to determine exactly how many times a person had to use the drug to develop a dependence on it. But it is likely more than just once: "Anybody who's dependent on heroin is a multiple-time user, and about half the time, people who [try] it never want to use again," Anthony said.

The study had several other limitations as well, he said. "People who take heroin for the first time and die right then can't be included in our study," Anthony said. The "estimates [also] rely on subjects being honest. We do our best to encourage people to be accurate, but it doesn't always work."

Still, the new study has the potential to change the way policymakers address the nation's current heroin epidemic. According to the study authors, their findings indicate that primary prevention, or stopping people before they start using heroin, and early-outreach initiatives could help control the spread of heroin use in the United States.