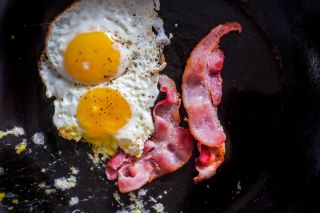 High-protein diets like the keto diet and the Atkins diet are popular these days, but such diets may increase the risk of heart failure in middle-age men, a new study from Finland suggests.

The study researchers analyzed information from more than 2,400 men ages 42 to 60, who kept track of the food they ate for four days. (The men in the study were not told to follow any particular diet.) Then, the men were divided into four groups based on how much protein they ate, with the lowest group consuming about 78 grams a day, on average, and the highest group consuming 109 grams a day. The participants were then tracked for 22 years, during which about 330 were diagnosed with heart failure.

The study, which was published May 29 in the journal Circulation: Heart Failure, is one of the first to look at the link between high-protein diets and heart failure, a condition in which the heart muscle can't pump enough blood to meet the body's normal demands.

"As many people seem to take the health benefits of high-protein diets for granted, it is important to make clear the possible risks and benefits of these diets," study senior author Jyrki Virtanen, an adjunct professor of nutritional epidemiology at the University of Eastern Finland, said in a statement.

However, the researchers stressed that more studies are needed in diverse populations to confirm the findings. The study also only found an association between a high-protein diet and heart failure, and cannot determine whether changing the amount of protein in a person's diet would prevent heart failure.

The new study by itself is not enough to recommend against high-protein diets for men, said Dr. Andrew Freeman, director of the Cardiovascular Prevention and Wellness program at National Jewish Health hospital in Denver, who was not involved with the new research. But the findings add to a growing body of literature suggesting that high-protein diets may be harmful for heart health, he said. For example, diets high in saturated fat, which is found mainly in meat and dairy products, have been linked with an increased risk of heart attack and stroke.

"The overall sum of the data that's out there would suggest that the high-protein diet that's become a fad as of late is not necessarily the most ideal diet," Freeman told Live Science. In general, "Americans consume way too much protein," and may want to consider avoiding excessive amounts of protein in their diet, he added.

The U.S. government recommends that people consume about 0.8 grams of protein per kilogram of body weight, or 0.36 grams per pound of body weight, which would translate to about 56 grams a day for a 155-lb. sedentary man, and 46 grams per day for a 130-lb. sedentary woman. However, exactly how much protein a person needs varies depending on a number of factors, including their activity level, age and current state of health, according to Healthline.

Dr. Larry Allen, director of the heart failure program at UCHealth in Aurora, Colorado, said the new study cannot prove that high-protein diets actually cause heart failure — it could be that other factors are responsible for the association. For example, it's not clear whether it's protein itself, or other things associated with a high-protein diet, such as the lack of certain nutrients, that could affect heart health, said Allen, who was not involved in the study.

But in general, the findings support the idea that a well-balanced diet, high in vegetables and whole grains, "tends to be associated with better outcomes" for heart health than an unbalanced diet, such as one that's heavy in protein, Allen told Live Science.

The American Heart Association recommends a diet that includes a variety of fruits and vegetables, whole grains, low-fat dairy products, poultry, fish, beans and nuts, as well as one that limits the intake of sweets, sugar-sweetened beverages and red meats.