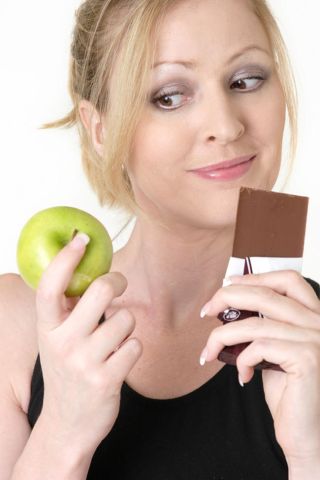 Don't beat yourself up if you tend to opt for immediate indulgences, such as eating chocolate, over choices with long-term benefits, such as heading to the gym.

Humans are particularly bad at making these kinds of decisions, especially if we're aware of what short-term satisfaction we missed out on, new research suggests.

In the study, 78 participants were asked to make repeated decisions involving short- and long-term rewards during a computer task. Those who were informed about fictive outcomes — what they could have gotten, had they made the opposite choice — were more than twice as likely to go for the quick reward than those who weren't given this "what if" information.

The results suggest more information doesn't necessarily lead to better choices. The more people know about the short-term gratification they had to give up, the less likely they are to make choices that will result in benefits down the road.

The take-home message: "Do everything you can to get your attention away from any kind of short-term reward," said study author Bradley Love, a psychologist at the University of Texas at Austin. "It doesn't do you any good to think about what one could be doing, what one's giving up."

In real-life situations, it's often many small decisions, such as eating healthy foods every day, that add up to a bigger goal with long-term benefits, such as losing weight.

The experiments mimicked these everyday dilemmas, with participants completing 250 trials of a decision-making task. Rewards came in the form of points, and participants tried to maximize their scores. As an incentive, subjects were paid a small cash bonus at the end, depending on how well they did.

In each trial, they were asked to pick one of two options, one of which awarded more points than the other in the short-term. But choosing the "quick reward" made both options worth fewer points in the next trial.

"It's always better immediately, but it makes the whole world worse, both options become not as appealing," Love told LiveScience.

As a result, subjects can actually rack up more points if they chose the "long-term option," which awards fewer points immediately, but makes the options go up in value in each subsequent trial.

"In a way, the participant is sacrificing in the immediate choice, but it puts them into a much better place, and if they stick with that strategy, overall they'll earn a lot more money," Love said.

Why do people have such trouble shunning these quick rewards?

"It's just so seductive to choose a short-term option, because it's always better [immediately]," Love said. "It's hard to see the impact of one decision over time."

However, the study was based in a laboratory, so future research is needed to see if the results hold in the real world.

Incentives that make long-term benefits more immediate, such as grades, income raises and even payment for shedding pounds, might help people stay on the path toward long-term success.

"People have no problem doing the right long-term thing when there's a short-term reward associated with it," Love said.

The results were published in the February issue of the journal Judgment and Decision Making.