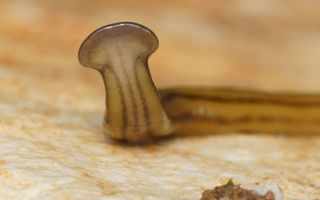 Heads up! Diversibipalium multilineatum is one of five invasive species of hammerhead flatworm to take up residence in France and French territories overseas.
(Image: © Pierre Gros, CC BY 4.0)

The invaders are giant hammerhead flatworms — brightly colored specimens that look like earthworms on steroids. They have muscular, colorful bodies topped with elongated heads resembling those of hammerhead sharks, though on a much smaller scale. The worms can measure more than 1 foot (40 centimeters) in length, and they occupy a range of ecosystems on land, gobbling up earthworms and other invertebrate prey.

And for almost 20 years, five invasive species of these worms have been detected in parts of France and in French territories, according to a new study collecting reports of sightings dating back to 1999. Though the worms were first spotted decades ago, this is the first study to investigate the extent of their invasion and to question what it might mean for the ecosystems that they overrun. [In Photos: Worm Grows Heads and Brains of Other Species]

Flatworms may not look that exciting, but they have an astonishing superpower: regeneration. When bits of them are amputated, these bits can regrow into complete worms — even from snipped-off fragments that represent 1/300th of the worm's body.

In one case, a flatworm sent into space grew a second head after its tail was cut off. And in another study, researchers tweaked worms' regeneration so that after the animals' heads were amputated, they regrew heads and brains resembling those of different species.

Flatworms can be introduced to foreign habitats as soil stowaways in international plant shipments, the scientists reported in the new study. And though many flatworm species are native to Europe, giant hammerhead flatworms are typically found only in the warm parts of Asia, lead study author Jean-Lou Justine, a professor with the Department of Systematics and Evolution at the National Museum of Natural History in Paris, told Live Science in an email.

Over four years, Justine and his colleagues investigated 111 records and observations gathered by volunteers from sightings in gardens, from 1999 to 2017; reports described dozens and even hundreds of the hammerhead flatworms in single locations, the scientists said. The researchers identified five non-native species of giant hammerhead flatworms, distributed in mainland France and in French overseas territories, including Caribbean French islands, French Polynesia and French Guiana.

Two of the flatworm species in the Diversibipalium genus — one black, found in France, and one an iridescent blue, found on the island of Mayotte — are likely newfound species, according to the study.

One reason the giant flatworm species reported in the study are such successful invaders is that they reproduce asexually, which enables a single individual to produce many offspring immediately, Justine told Live Science.

"Another reason is the absence of predators," Justine added. "Land flatworms produce chemicals that give them an unpleasant taste," so predators avoid eating the worms.

The flatworms have been showing up where they shouldn't be since at least 1999, so the study authors were "amazed" to find that there was so little published research about the invaders prior to this investigation, they wrote in the study. They were also surprised that scientific authorities have yet to evaluate the impact of the worms' invasive habits on native ecosystems; flatworms prey on organisms that live in soil, which could affect soil ecology and the life cycles of plants, Justine said.

"As invasive predators, [giant flatworms] are likely to be a threat to the abundance and biodiversity of the soil invertebrates," he said.

The findings were published online today (May 22) in the journal PeerJ.