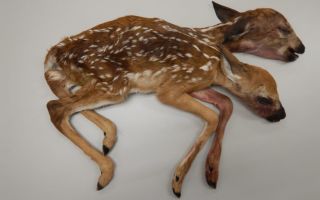 These conjoined twin fawns are the first known deer to be born with two heads, two hearts and a full coat of spots.
(Image: © Gino D’Angelo et al/University of Georgia)

In May 2016, a Minnesota man was hunting for mushrooms in a forest near the Mississippi River when he stumbled upon something a little more unusual than fungi. Nestled dead in the underbrush was what looked like a single newborn baby fawn, carrying two heads on one body.

The baby deer was actually a pair of conjoined female twins with a body about 23 inches (60 centimeters) long from tail to heads. Their body was patterned with the telltale spots of other white-tailed deer and appeared to have been recently groomed. Yet the fawns lay alone, dry and freshly dead on the ground with no signs of their mother in sight. [Photos: See the World's Cutest Baby Wild Animals]

The mushroom hunter delivered the deer to the nearby Minnesota Department of Natural Resources, knowing he had discovered something remarkable. Now, a new case study published in the April issue of the journal The American Midland Naturalist explains just how remarkable the conjoined fawns truly are. According to the new study, this discovery marks the first documented case of two-headed white-tailed deer twins brought to full term and birthed.

"It's amazing and extremely rare," study author Gino D'Angelo, assistant professor of deer ecology and management at the University of Georgia, told The Independent. "We can't even estimate the rarity of this."

For their new study, D'Angelo and his colleagues conducted computed tomography (CT) and magnetic resonance imaging (MRI) scans on the conjoined twins, then conducted a full necropsy.

The MRI scans revealed that the twins shared a single spinal column that forked into two distinct necks and heads about halfway up. During the necropsy, researchers found that the fawns had two hearts nestled inside a single pericardial sac. They had two esophagi and forestomachs (the first compartment of the stomach where food is partially digested to be regurgitated as cud), one of which ended in a closed-off tube.

"Their anatomy indicates the fawns would never have been viable," D'Angelo told The Independent. "Yet, they were found groomed and in a natural position, suggesting that the doe tried to care for them after delivery. The maternal instinct is very strong."

D'Angelo said he suspects the fawns were likely delivered stillborn — but the mere fact that they were delivered at all is a scientific first. According to the new study, most female white-tailed deer carry twins, but observations of conjoined twins are extremely rare in the scientific literature. A 2008 review of studies looking as far back as 1671 found only 19 cases of conjoined twins in nondomestic land mammals, just two of which were white-tailed deer. In both cases, the mother doe and her children all died while the twins were in utero.