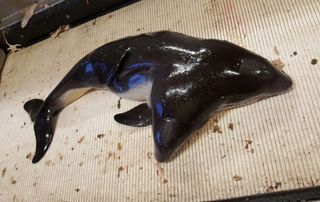 These two-headed conjoined porpoises were pulled up from the North Sea.
(Image: © Erwin Kompanje)

Two-headed conjoined porpoises were recently hauled up by a fishing boat in the North Sea, not far off the coast of the Netherlands.

The bizarre-looking creatures were already dead, and the fishermen, who feared trouble from the authorities, took photos and then tossed the duo back overboard.

It's not clear exactly why the porpoises died, but the double-headed creatures likely could not swim, said Erwin Kompanje, a researcher at the Natural History Museum and the Erasmus MC University Medical Center in Rotterdam, the Netherlands, who recently wrote up the case in the June 7 issue of the journal Deinsea. Another cause may have been their fused hearts, which may not have worked adequately, Kompanje said. [Porpoise Photos: The World's Most Endangered Mammal]

Conjoined twins are a rarity for humans, but they're also extremely rare for harbor porpoises (Phocoena phocoena), Kompanje said. That's because newborn dolphins and porpoises, which are mammals, need to immediately start swimming on their own or they drown, Kompanje said.

"Normal twins are extremely rare in cetaceans, as there is not enough room in the mother's body to have more than one fetus," Kompanje told Live Science. One case report pegged the incidence of twinning in cetaceans at less than one in 200.

Only one past case of a harbor porpoise bearing twins has ever been reported. Given the rarity of twinning, it stands to reason that conjoined twins are even more of an oddity, Kompanje added. In the past, only nine other cases of conjoined twins have been reported in whales or dolphins, and most of these were described in fetuses pulled from dead pregnant females, according to the study.

Conjoined twins likely form in cetaceans in the same way they do in humans; either two separate embryos fuse after having separated, or a single embryo fails to completely split.

Harbor porpoises are the most abundant cetaceans in the waters off northwest Europe, with at least 345,000 of these creatures frolicking in these northern waters. Each female typically produces one offspring every year or two.

In the current case, the fused porpoises were first pulled up in the netting of a fishing boat on May 30, 2017, near Hoek van Holland, the Netherlands.

The creatures were clearly newborn; they had a floppy dorsal fin, an open umbilical opening and hairs in the rostrum, or beak-like snout — all telltale signs that the creatures were not long outside the womb. The body was about 27 inches (70 centimeters) long and weighed about 13 lbs. (6 kilograms).

However, the specimen had two completely formed heads and one fully formed body with two pectoral fins. This makes it likely that the porpoises were symmetrical conjoined twins (or "Siamese twins"), meaning fusion occurred between two well-developed embryos. The twins had fused side-by-side at the pelvis and abdomen. The lone genital opening revealed that the porpoises were male.

Because the fisherman tossed the porpoises overboard (they thought keeping the body would be illegal), other insights that could have been gleaned from the rare case are lost to science, the researchers said in the study.

If researchers had been able to study the porpoise more thoroughly, they likely would have captured 3D computed tomography (CT) scans, put the porpoises in a magnetic resonance imaging (MRI) machine, conducted CT angiography to study the blood vessels leading to and away from the heart, and 3D-printed a skeleton of the creature, Kompanje said.