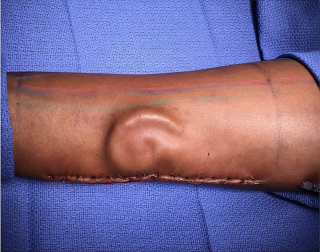 Courtesy the U.S. Army
(Image: © When a soldier lost her left ear in a car crash, Army surgeons helped her grow a new one — on her forearm.)

Burrage lost her left ear during a single-car crash in Odessa, Texas, in 2016. Now, she is the latest recipient of a cosmetic reconstruction procedure called prelaminated forearm free flap surgery — a sci-fi-sounding operation that involves "growing" new tissue by implanting a patient's cartilage under their forearm skin. While many civilians around the world have successfully undergone the procedure, Burrage is the first American soldier to receive the novel reconstruction process, according to a statement from the U.S. Army. [The 27 Oddest Medical Cases]

"The whole goal is, by the time she's done with all this, it looks good, it's sensate and in five years if somebody doesn't know her they won't notice," Lt. Col. Owen Johnson III, chief of plastic and reconstructive surgery at William Beaumont Army Medical Center in El Paso, Texas, said in the statement. "As a young active-duty soldier, they deserve the best reconstruction they can get."

To lend an ear

So how does prelaminated forearm free flap surgery work? First, surgeons create a mold of the new prosthetic ear by harvesting some of the patient's cartilage — usually from the patient's ribs. The cartilage is shaped, sometimes with the help of a 3D-printed mold, and then inserted under a flap of skin cut open on the patient's forearm. (In another variant of the surgery, patients have had cartilage implanted under their forehead skin to grow new noses.)

Because the molded cartilage comes from the same cells as the patient's arm tissues, the skin will begin to grow around the mold. New blood vessels begin to form inside the transplanted tissue and, after several months of healing, the newly formed ear can be safely transplanted to the head. In Burrage's case, extra skin from her forearm was also used to cover scar tissue around her jawline.

"[The ear] will have fresh arteries, fresh veins and even a fresh nerve so she'll be able to feel it,"  Johnson said. In addition, Burrage will even be able to hear out of it, because surgeons were able to reopen her ear canal following the trauma of her accident.

"I didn't lose any hearing and [Johnson] opened the canal back up," Burrage said in the statement. "It's been a long process for everything, but I'm back."

While this sort of transplant may be a first for the Army, similar operations have been performed successfully on civilians around the world. In 2017, a team of Chinese plastic surgeons led by Dr. Guo Shuzhong completed a similar surgery on a man who lost his ear during a traffic accident. (The forearm-ear transplant took about 7 hours to complete.) Guo told the Daily Mail that he and his team perform similar procedures on about 500 children each year.

Famously, not all recipients of the surgery have been human. In 1995, perhaps the first patient to "grow" a human ear using transplanted cartilage was a laboratory mouse at the University of Massachusetts Medical School. The mouse — nicknamed the "earmouse" or the "Vacanti mouse," after lead researcher Charles Vacanti — carried the ear on its back and spurred a wave of controversy about genetic engineering.

In fact, the Vacanti mouse was not genetically engineered at all: He was a regular (albeit hairless) mouse who had simply received what is fast becoming a standard — and life-changing — plastic surgery procedure.