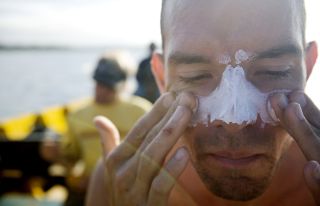 Hawaii is poised to ban certain sunscreens from sale within its borders in the name of protecting coral reefs. But vacationers will still be able to protect themselves from skin cancer while snorkeling and frolicking in the waves — but might look a little funny.

On Tuesday (May 1), Hawaii's Legislature passed a bill to ban sunscreens containing the common chemicals oxybenzone and octinoxate, effective Jan 1, 2021. The bill is now awaiting a signature from Gov. David Ige.

The ban follows research suggesting that sunscreen drifting off the skin of tourists can damage coral. But only chemical sunscreens are affected — mineral sunscreens that use zinc oxide or titanium dioxide to physically block the sun's rays are still allowed. These sunscreens have fallen out of favor because they often leave a white sheen on the skin, but marine biologists say it's worth looking a little goofy to save reefs. [5 Things You Didn't Know About Sunscreens]

"Any little thing we can do could have a huge impact, because corals are getting it from every side," said Nikki Traylor-Knowles, a biologist who studies stresses on corals at the University of Miami.

What's in a sunscreen?

Coral reefs the world over face a whole load of threats. The most pervasive is climate change, which warms and acidifies ocean waters and causes frequent coral bleaching events. Corals live in symbiosis with algae that conduct photosynthesis from the safety of the coral's bony structure and, in return for that protection, provide the coral food. Bleaching occurs when corals get stressed and expel the algae. Coral can recover from bleaching, but recovery becomes less likely if the ocean conditions remain stressful or if bleaching occurs year after year.

Pollution, including runoff from storm water and untreated sewage, can damage reefs as well, according to the National Ocean Service. But in recent years, scientists have pointed to sunscreen-slathered tourists as a previously unrecognized source of water pollution.

Two sunscreen chemicals, oxybenzone and octinoxate, have been shown to damage corals in a variety of ways. According to 2016 research in the Archives of Environmental Contamination and Toxicology, which John Fauth, a biologist at the University of Central Florida, helped conduct, oxybenzone damages coral DNA, causes coral to bleach, and even prompts free-swimming coral larvae to excrete a hard skeleton prematurely, entombing themselves. The bleaching may be the result of the sunscreen compounds promoting viral infections in the coral, according to a 2008 study. The chemicals are also endocrine disruptors, Fauth said, so they damage corals' ability to reproduce.

It might seem mind-boggling that a few humans slathered in sunscreen could make an impact in the world's biggest ocean, or any ocean for that matter, but these compounds can have effects down to the parts per trillion, Fauth told Live Science.

In addition, Traylor-Knowles said, sunscreen can quickly become concentrated in the sheltered coves and lagoons where people love to snorkel and swim.

"Other animals, like fish, can swim away from an area that is being impacted by a chemical, right, but corals can't do that," Traylor-Knowles told Live Science. "They just have to sit there and take it."

Hawaii's likely ban of the chemicals is hugely heartening, both Fauth and Traylor-Knowles said. A few tourist areas in Mexico have enacted similar bans, Fauth said, and Hawaii might be the "tip of the spear" for other island nations that depend heavily on tourism.

So, what is a sun-sensitive but coral-loving tourist to do? Cover up and wear mineral sunscreens (though avoid mineral sunscreens that use a nano-form of minerals, which might affect phytoplankton, the base of the ocean food chain).  For their research on sunscreen, Fauth and his colleagues said they were careful to avoid contaminating the water while they took samples: They showered, rinsed all their gear with harsh lab soap and avoided all personal care products, even deodorant, for a week.

"We sort of looked at each other and said, 'This is going to be a smelly mess by the end of the week,'" Fauth said.

But with the help of protective clothing, hats, rash guards and judicious use of shade, the researchers managed to avoid sunburn. Mineral sunscreens make sun protection even easier, and should be seen as a badge of honor, Fauth said.

"You've got on something that's protecting you," he said, "and meanwhile, it's not harming the marine life."