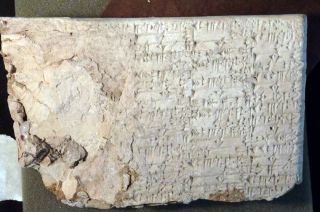 Hundreds of 4,000 year old tablets that were looted in Iraq and bought by the U.S. company Hobby Lobby seem to hail from a mysterious Sumerian city whose whereabouts are unknown, a U.S. law enforcement agency just announced.

The tablets are part of a cache of thousands of looted artifacts purchased by Hobby Lobby and seized by the U.S. government. They are now set to be returned to Iraq.

Of the 450 cuneiform tablets in that haul, many came from an ancient city called Irisagrig, U.S. Immigration and Customs Enforcements said in a statement. Many of these tablets date from between 2100 B.C. and 1600 B.C., the statement said. Most of them are legal or administrative texts– meaning that they contain records such as contracts and inventories of goods that made it easier for private citizens and the city’s government to run their affairs – while a few contain a form of magical spells called incantations, the statement said. [In Photos: Ancient City Discovered in Iraq]

Irisagrig is a "Sumerian city never excavated before and whose location remains unknown," wrote Manuel Molina, a research professor with the Spanish National Research Council, in a paper published in the book "From the 21st Century BC to the 21st Century AD: Proceedings of the International Conference on Neo-Sumerian Studies Held in Madrid 22-24 July 2010" (Eisenbrauns, 2013).

The exact location of this site has been debated among scholars Molina wrote, adding that a number of tablets from Irisagrig have appeared on the antiquities market in recent years and may have been looted recently.

In addition to the 450 cuneiform tablets, Hobby Lobby also forfeited thousands of clay bullae (small inscribed texts that may have identified who owned an item) and cylinder seals, though the statement did not specify where these artifacts are from. Some of the clay bullae appear to date to from between 2,200 years ago and 1,400 years ago, a time when the Parthian Empire (247 B.C.- A.D. 224) and Sasanian Empire (A.D. 224- A.D. 651) flourished in Iraq, the statement said.

Hobby Lobby is owned by Steve Green, an antiquities collector who helped found the Museum of the Bible, which opened in November 2017 just a few blocks away from the U.S. Capitol in Washington, D.C. Green has amassed a collection of about 40,000artifacts since 2009. Scholars have raised concerns that some of the artifacts he collected may have been looted in recent times and that others, such as a collection of Dead Sea Scrolls, may be forgeries.

Not all scholars agree that the artifacts should be returned right away. "If these tablets are returned and if they are from Irisagrig, it will be a great tragedy for scholarship that they will not be published before they are returned," said David Owen, a professor of Near Eastern Studies at Cornell University. Owen has published a number of scientific papers describing tablets from Irisagrig, but has not worked with Hobby Lobby and has not studied the seized texts.

"Once they enter the bowels of the Iraq Museum, it is unlikely scholars will ever have acccess to them, nor are there any Iraqi scholars capable of publishing them given the many thousands of unpublished texts already in storage in the museum for generations and mostly inaccessible to scholars," Owen told Live Science.

Owen added, "Our goverment should, first and foremost, make sure all artifacts are recorded and published before repatriation. This would be of great benefit not only to scholarship but also to the Iraqis who do not have the resources to publish these texts. Anything less is a travesty."

The seized artifacts will be repatriated to Iraq in a ceremony that will take place in Washington, D.C., on May 2 at 2 p.m. ET at the residence of the Iraqi ambassador to the United States, the statement said.