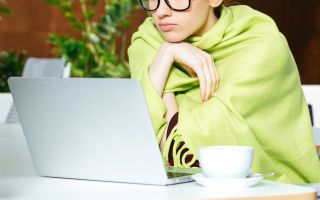 It all started when a woman's co-workers ramped up the air conditioning. For some reason, she broke out in hives. Concerned, the woman visited the doctor and got startling news: She was allergic to the cold.

The condition, known as cold urticaria (ur-tih-KAR-ee-uh), is rare, but it jibed with her past experiences, the woman's doctors wrote in a new Australian case report, published online April 3 in the journal Climacteric. The 40-year-old woman said she also got hives on windy days, while walking outside on cold mornings and after swimming in the ocean.

The latest episode was brought on because her co-workers, who were experiencing menopausal hot flashes, had cranked up the AC in the office, her doctors found. [7 Strange Signs You're Having an Allergic Reaction]

Despite her rare allergy, the doctors treated the woman as they would any patient with hives: They prescribed her antihistamines to relieve her symptoms. Here's why: When the immune system detects something potentially dangerous — in this case, the cold — certain white blood cells and tissue cells release histamines that find and attach to histamine receptors, Live Science previously reported. Once connected, these histamines induce an inflammatory response, such as increased blood flow, to help heal the site.

Antihistamines block these histamines, so the allergy can't lead to an inflammatory response, Live Science reported. However, in this case, the doctors also advised the woman to prepare for the cold — for instance, by taking antihistamines in advance if she knew she would be exposed to a chilly place.

They also recommended that she wear a long wet suit when swimming and that she swim with a partner, just in case her cold urticaria caused her to lose consciousness, they wrote in the case report. That's because swimming in very cold water can cause some people with cold urticaria to experience very low blood pressure, fainting or shock, according to the Mayo Clinic.

It's unclear what causes cold urticaria, but sometimes it's triggered by certain blood cancers and autoimmune diseases, said Dr. Tho Truong, an allergist at National Jewish Health in Denver who was not involved with the patient's care. In the woman's case, it's possible she inherited a trait that made her susceptible to the condition, as her mother has a similar, but milder, reaction to cold temperatures, the doctors wrote in the case report.

Up to 3 percent of the population experiences hives, and the percentage who have cold urticaria is even lower, Truong told Live Science. However, it's possible that even a person with run-of-the-mill hives will develop the red splotches after a temperature change, such as when getting into a hot shower or going into the icy outdoors.

"It's not like they're allergic to heat [or cold], but they have this underlying condition that makes their immune cells very sensitive to these physical changes," Truong said. "They don't necessarily have cold-induced urticaria; they just have urticaria," or hives.

An allergy to the cold may be rare, but it's not the only unusual allergy out there. For example, a toddler in Minnesota is allergic to water, a condition known as aquagenic urticaria, Live Science reported earlier this year.