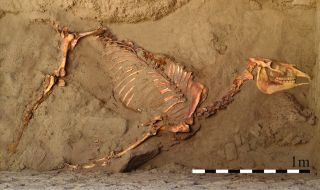 More than 3,000 years ago in the Nile River Valley, a body was carefully prepared for ceremonial burial. It was wrapped in a shroud and placed in a tomb, surrounded by important objects that demonstrated its elevated status.

The mourners probably had long faces as they sent their loved one to an eternal rest.

But the longest face of all likely belonged to the grave’s occupant — a chariot-pulling horse, who was important enough to merit an ornate burial typically reserved for high-ranking people.

Scientists first unearthed the horse in 2011 in Tombos, a site located in the Nile Valley in what is now Sudan. The skeleton dates to around 949 B.C., and it is thought to be the most compete horse skeleton from that period ever found, according to a new study describing the grave and its contents, published online April 25 in Antiquity Journal. [Ancient Nubia: A Brief History]

The ancient Egyptians established Tombos around 1450 B.C. as a foreign outpost in the rival kingdom of Nubia. The city later emerged as an important Nubian community after withdrawing from Egyptian rule. Artifacts unearthed from archaeological sites in Tombos reveal much about the influence of Egyptian culture, as well as serve to illuminate aspects of daily life that were distinctly Nubian, the scientists wrote in the study.

When the site was first excavated, archaeologists found a tomb complex with a chapel and pyramid aboveground, and a shaft leading to multiple chambers underground — a design typically associated with "elite" pyramid tombs, according to the study. The four burial chambers contained human remains from around 200 people representing several generations, along with pottery, tools and decorative objects.

However, the tomb held very few animal remains, and finding such a well-preserved horse — in the shaft underneath the chapel, at a depth of about 5 feet (1.6 meters) — surprised the scientists, study co-author Michelle Buzon, a bioarchaeologist in the Department of Anthropology at Purdue University, said in a statement.

"It was clear that the horse was an intentional burial, which was super fascinating," Buzon said.

Bits of chestnut fur with white markings still clung to the animal's lower hind legs, and the researchers found decayed remnants of a shroud that helped them to date the burial to between 1,005 and 893 B.C., they wrote in the study. The tomb shaft around the skeleton also revealed other artifacts that hinted at the horse's status, including a carved scarab beetle and a piece of iron — likely once part of the animal's bridle — that is the oldest example of iron unearthed in Africa.

After examining the horse's teeth and bones, the scientists determined that the animal was a mare that died when it was between 12 and 15 years old. Further analysis of the skeleton showed that it led an active life, and signs of stress in its ribs and spine hinted that it wore a harness for pulling a chariot. However, its age at the time of death indicates that the animal was cared for and valued by its owner during its lifetime, the study authors reported.

A tomb burial for the horse suggests that the animal probably played a significant role in its owner's household, and was more than a mere beast of burden, while the iron bridle piece found in the tomb — an expensive and rare item that would have been made specifically for the horse — further helps to establish its elevated status, according to the study.

While formal burials for horses were rare at the time, they later became more commonplace in Nubian and Egyptian society, around 728 to 657 B.C. But the attention to detail in this burial and the reverence shown suggest that horses may have already achieved a symbolic representation of wealth and power for Nubian people, and could have played a more important role in Nubian culture — in life and in death — than has been previously suspected, the researchers reported.