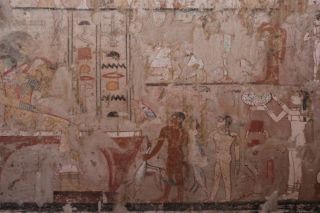 The tomb contains well preserved wall paintings, including this image showing fish and other goods being presented to Hetpet, who is shown seated at the far left.
(Image: © Egypt Antiquities Ministry)

The tomb of a woman named Hetpet, who became a senior official in the royal palace, has been discovered in a cemetery on the Giza Plateau, archaeologists from Egypt's antiquities ministry announced today (Feb 3).

The tomb dates back over 4,300 years, to a time after the Giza Pyramids had been constructed. While Giza is most famous for its pyramids, the site also contains large cemeteries that archaeologists have been uncovering gradually for nearly two centuries. These tombs often hold the burials of elite members of ancient Egyptian society.

"The tomb has very distinguished wall paintings, in a very good conservation condition, depicting 'Hetpet' standing in different hunting and fishing scenes or sitting before a large offering table receiving offerings from her children," Egypt's antiquities ministry said in a statement. [See Images of the Giza Tomb and Paintings Inside]

"Scenes of reaping fruits, melting metals and the fabrication of leather and papyri boats as well as musical and dancing performances are also shown on walls," the ministry said. The paintings also show two monkeys: In one scene, the monkey is gathering fruits and the other it is dancing in front of an orchestra, according to the ministry.

The tomb also contains a shrine with a purification basin and places where incense and offerings could be held. One area inside the shrine may have held a statue of Hetpet, which is now missing, the archaeologists suspect. The archaeologists didn't find a mummy inside the tomb, but it's possible the mummy and statue were robbed in ancient times, something that commonly occurred in ancient Egypt.

An Egyptian team led by Mostafa Waziri, Secretary-General of the ministry's Supreme Council of Antiquities, discovered the tomb. Before the announcement today, antiquities minister Khaled El-Enany told media that about a dozen Egyptian archaeological missions are conducting work throughout the country and more discoveries from these missions are expected in 2018. Additionally, there are also missions led by foreign archaeologists taking place throughout Egypt.