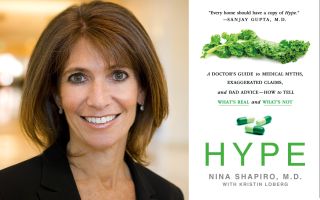 Dr. Nina Shapiro is used to getting questions. After all, she's both a surgeon and a professor at UCLA.

And at a time when people are having a hard time distinguishing between facts and misinformation, Shapiro thought it would be the perfect opportunity to put all of those questions into a new book, called "Hype" (St. Martin's Press, 2018), in which she separates medical myth from reality. [25 Medical Myths That Just Won't Go Away]

Shapiro warns against putting too much stock in health headlines and asks you take a hard look at the information you find online. She also reminds you to wear your darn bike helmet. Want to know why? She'll happily tell you. After all, she's used to answering questions.

With that in mind, Live Science took the opportunity to ask Shapiro some of our most pressing questions. (This Q&A has been edited lightly for length and clarity.)

Live Science: I want to start with one of the most hyped topics in health: the effects of food and diet. Let's use eggs as an example. One study says eggs are great; the next says they'll kill you. What does this tell us about oft-quoted food studies?

Dr. Nina Shapiro: Food studies will tend to give you extremes, sometimes even, "Here's what will cure or prevent cancer." But we don't have a cure for cancer. We have ways we can help prevent it, but "cancer-busting foods" is a term that really bothers me because people can get wrapped up in it and think, "Oh, here's the answer." You can't just eat this kind of food to avoid cancer or cure your cancer. A lot of these headlines have a grain of truth in them, but the message gets exaggerated. Most people are not scientists, so what I recommend is just to do some simple research behind what you hear.

Certain words will always make me raise an eyebrow. "Groundbreaking," "breakthrough," "game-changing" — all these really strong terms are often misleading, because trust me, I work in this field — very few things are actually groundbreaking.

And when you read a headline that says, "This cures cancer," go beyond that headline. Was it an animal or a human study? Was it done in a petri dish? If it was a human study, was it three people or 3,000 people? Was it over a week, a month or a decade? What is its relevance to you?

LS: Is there a single most dangerous medical misconception floating around today?

Shapiro: There are many. One is the dangerous, dangerous misconception that vaccines cause autism, and that's still being thrown around in the health sphere. Along with that is the misconception that vaccines are not necessary. These false notions get thrown around, and people can quickly lose sight of reality. The vaccinations our children receive have allowed us to all but obliterate horrible, horrible diseases.

LS: You mentioned "Jane" in your book, a nurse you knew who did "alternative treatment" for her cancer, including raw food, teas, meditation and exercise. She died after just a few months because she accepted no medical treatment. The story is heartbreaking, but what's the real lesson here?

Shapiro: Part of the point of that story is that complementary alternative medicine is wonderful when it's used as just that — a complement to your therapy. This nurse, had she included all of what she did — eating healthy, exercise, meditation — along with her regimen of surgery, chemotherapy, radiation or whatever was necessary, she would have sailed through, and would probably be alive today. She had a very [treatable] cancer. There's really no reason not to use any of that therapy. It's very safe, for the most part. But when it's used as a stand-alone, that's when it becomes potentially deadly. You have to keep the "C" in "CAM," complementary alternative medicine. There's no such thing as alternative medicine. There's medicine that works, and medicine that doesn't. There's no evidence that diet, meditation or whatever works alone when it comes to [treating] cancer.

LS: Related to that, should people be wary of naturopathic medicine or homeopathy?

Shapiro: People think homeopathy means "natural." The idea of homeopathy is taking a small, infinitesimal amount of something and adding it as a tincture to somebody's care and that somehow becomes the treatment.

"Naturopathic" sounds so nice because it has "natural" as a root word, and it's alternative and it's not invasive and doesn't involve standard, FDA-approved medications. The practitioners are usually not physicians. They call themselves "naturopathic doctors," but they're not medical doctors. This can get infuriating, because many places that bill themselves as an "oasis of healing" … prey upon people at their most vulnerable — when they're facing a cancer diagnosis — and [these places] rope people into thinking that their treatment is a viable option as opposed to [chemotherapy], radiation therapy or surgery.

LS: Society has largely vilified smoking. But vaping is newish, and now many states are legalizing marijuana. What's the risk/reward there?

Shapiro: The only benefit in vaping is in helping people quit cigarette smoking. The problem is that it's becoming the gateway to cigarette smoking for children and teenagers. It's more common now to walk into a high school bathroom and see kids "Juuling," using the Juul [device] that looks like a flash drive, rather than smoking now.

A potential benefit of legalizing marijuana, or at least making it a prescription item, is that it can be an adjuvant treatment for patients with chronic pain, cancer pain, intractable nausea or intractable headaches when patients don't respond to other therapies. It could be something used in addition to or in place of, for example, strong opioids, that can alleviate some of this opioid epidemic, which is just a horror that we're facing right now. There are legitimate reasons to prescribe it, so there is a small role for it.

LS: Is there good, basic, simple health advice you can give people that will improve their health and their health expectations down the line?

Shapiro: We can control [laughs] honestly, some very, very boring basics, to be real. Put on your seat belt every time you're in the car. Kids and adults should wear bike helmets every time they're on a bike. Wear sunscreen today, [and] you lessen your chance of skin cancer tomorrow. These things don't make headlines, but these small things, statistically, save more lives and alleviate more long-term health problems than drinking organic milk or whatever the new headline of the day is. Those simple things are live-saving and life-prolonging.

One of my inspirations for this book was simply seeing so many people who were focused on health and wellness and prolonging and improving [their] quality of life just make these stupid mistakes. They don't think of the simple things. My best advice is, do those simple things, and please, whenever you see a health headline that sounds incredible, you need to dig a little bit deeper. Don't believe the hype, I guess.

"Hype" will be available beginning May 1 via Amazon and local bookstores.

Hype
Amazon
$14.99
View
We check over 130 million products every day for the best prices