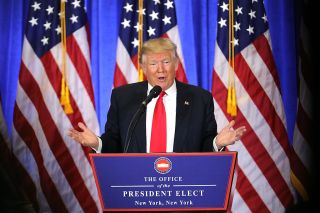 While Trump's team denied making the specific request that Kennedy referenced, a spokeswoman said that Trump is considering forming a commission on autism, reported CNN and other outlets.

The Trump team's response, which brought up autism in response to a question about a vaccine committee, appears to draw a connection between the condition and vaccines, despite overwhelming evidence debunking the claim that vaccines cause autism. [5 Dangerous Vaccination Myths]

"Claims that vaccines are linked to autism, or are unsafe when administered according to the recommended schedule, have been disproven by a robust body of medical literature," the American Academy of Pediatrics said in a statement released on Jan. 10, in response to the news reports.

A 2016 study in the journal Pediatrics found that more parents are refusing to vaccinate their children now than a decade ago. Interestingly, the study also found that the percentage of parents who were concerned about the autism link has dropped in recent years. In 2006, 74 percent of pediatricians said the supposed link was a top reason for parents' refusal to vaccinate, but in 2013, only 64 percent of pediatricians said the same.

Still, beliefs about the much-discredited link persist — why?

The anti-vaccination viewpoint is a product of two colliding ideas, Jennifer Reich, an associate professor of sociology at the University of Colorado Denver told Live Science in March, 2016.

First, parents may think that they "are in this alone" and not responsible in any small way for other children in their communities, said Reich, who is the author of "Calling the Shots: Why Parents Reject Vaccines" (NYU Press, 2016). In other words, these parents don't feel that it's important to contribute to herd immunity, which protects individuals in a community who are unable to receive vaccines, Reich said.

Second, there is an idea that individuals hold all responsibility for their own health, and that society bears none for people's health decisions, Reich said.

Together, these beliefs may lead parents to view it as their duty to go it alone, and combine individual parenting with individualized health care, Reich said. These parents may spend a substantial amount of time researching information about vaccines and deciding whether the information applies to their children, she said.

"They begin to doubt whether population data [on vaccine safety] applies to their own families," she said.

Reich also noted that parents may believe that the diseases prevented by vaccines are not very serious. For example, parents may think that if their children do get sick with the measles, they will not develop the severe complications, such as encephalitis or deafness, that the disease can bring, she said.

Indeed, the 2016 Pediatrics study showed an increased in the percentage of pediatricians who said that parents refused to vaccinate their children because of a perception that the vaccines were unnecessary.