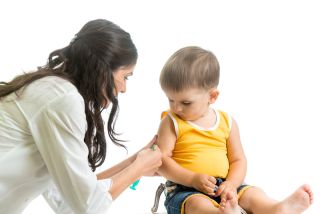 More parents are refusing to vaccinate their children now than a decade ago, but the reasons for refusals have changed, a new study suggests.

Parents who refuse to vaccinate their kids are now more likely to say their reason is that they do not see a need for vaccination, the researchers found.

Pediatricians should continue to talk to parents who have concerns about vaccines to try to increase immunization rates, said study co-author Dr. Catherine Hough-Telford, a pediatrician at the University of Alabama at Birmingham.

In the study, researchers surveyed 627 pediatricians in 2013 and asked them whether their patients' parents had ever refused a vaccination, or had asked to delay a vaccination. The researchers also asked pediatricians about their impressions of parents' reasons for refusing or delaying their kids' vaccination. The survey was a follow-up to an earlier one, with the same questions, conducted in 2006. [5 Dangerous Vaccination Myths]

The researchers found that in 2013, 87 percent of pediatricians surveyed said they encountered vaccine refusals from parents of their patients, up from 75 percent of pediatricians who said the same in 2006. This drop in what pediatricians perceive lines up with other research that has reported increasing rates of vaccine exemptions for nonmedical reasons, and increasing rates of children who are not receiving all or some of the vaccines they should receive for optimal health benefits, the researchers said in their study, published today (Aug. 29) in the journal Pediatrics.

Pediatricians perceived that parents' reasons for delaying vaccines were different from reasons that parents refused vaccinations altogether. For example, in the new survey, parents seemed to most commonly delay vaccination because they were concerned about their children's discomfort, and out of the mistaken belief that vaccines may burden children's immune systems. In contrast, parents who refused to vaccinate their kids more commonly did so because they considered vaccines unnecessary, the researchers found.

The percentage of pediatricians who said they perceived that parents refused to vaccinate their kids because they did not see a need for vaccines increased by 10 percent from 2006 to 2013, the researchers found.

However, parents' concerns about the now-well-refuted link between vaccines and autism declined during this time period, from 74 percent of pediatricians who perceived it to be one of the top reasons for vaccine refusal among parents in 2006 to 64 percent in 2013. [5 Things That Might Really Cause Autism]

The 2006 survey was conducted just after the first human papillomavirus (HPV) vaccine was approved but before it was widely offered by pediatricians to patients, the researchers said. Although this vaccine has been shown to be effective against cervical cancer and other cancers, it has a lower acceptance rate than other vaccines. The increase in vaccine refusal rates observed in the study may be partially explained by the fact that the HPV vaccine was recommended around the time the second survey was conducted in 2013, and more parents may have refused to use this vaccine for their kids.

Still, the rise in the perceived rates of vaccine refusal and delay are likely more complex than a single vaccine, the researchers said. For example, pediatricians reported that, though some parents refused just one vaccine, others refused more than one vaccine, Hough-Telford said in a statement.

One reason more parents may now think vaccines are unnecessary is that vaccine-preventable diseases are rare these days, and the public's memory of these diseases may be fading, Hough-Telford said.

However, since the data for the study was last collected in 2013, there have been a couple of publicized measles outbreaks, particularly one in California, she noted. "I think that that has potentially changed some perceptions about immunizations but I think it needs to be studied further," she told Live Science.