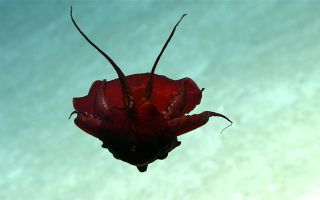 Thousands of feet below the ocean surface, an unidentified squid performed an upside-down ballet.
(Image: © NOAA Office of Ocean Exploration and Research, Gulf of Mexico 2018)

"There's a challenge for you — what is THAT?"

Unusual deep-sea creatures seen for the first time can sometimes stump even a seasoned expert in marine biology. And in a recent video of an ocean dive in the Gulf of Mexico, an expert's off-camera exclamation revealed his surprised response to the appearance of a squid that had contorted itself into such a peculiar shape that it barely resembled a squid at all.

On April 17, the inverted, folded-up squid made its on-screen debut for the cameras of an expedition submersible. Its posture was so peculiar that Mike Vecchione, a research zoologist with the National Oceanic and Atmospheric Administration (NOAA), dubbed the contorted cephalopod "the most bizarre squid I've ever seen." [Gallery: Exploring the Gulf of Mexico]

The dive was part of an ocean exploration mission to investigate deep-sea habitats in the Gulf of Mexico. The expedition is being conducted by the NOAA research vessel Okeanos Explorer and is taking place from April 11 through May 3.

From aboard Okeanos, scientists send deep-diving remotely operated vehicles (ROVs) to capture high-resolution video of marine communities and to map the geography of habitats on the bottom of the ocean. Okeanos researchers share frequent updates from the dives, including photos and video, posting them on the mission's website.

Video shared to YouTube by the Okeanos mission shows the squid as it drifted upside down in the water near an undersea mound, at a depth of about 2,790 feet (850 meters). While the species is difficult to identify from the footage, it is thought to be in the Discoteuthis genus, NOAA representatives said in a mission update.

In the video, the mystery squid's body seems to be curled inward very dramatically, arms folded in, as if in a defensive pose, but with four limbs extended stiffly outward. What little could be seen of its body and limb shape somewhat resembled squids in the Psychroteuthidae genus, Vecchione said in the video. But while its curled-up defensive posture is common in squids, in this case it was so extreme that "it doesn't even look like a squid anymore," Vecchione added.

During the same dive in which Okeanos scientists spotted the "twisted" squid, they also spied other strange creatures. At a depth of around 2,215 feet (675 m), a blind lobster (Acanthacaris caeca) reared back on its tail, spreading its pincers wide in a pose that is common for the species. And a "very grumpy-looking," flattened, frond-trimmed goosefish (Lophiodes beroe) — a type of anglerfish — appeared at around 2,100 feet (640 m), with prey-attracting lures beckoning from the center of its face.

Highlights from past Okeanos expeditions include a fish that "walks" on the seafloor; a pale, "ghostlike" octopus that may represent a new genus; and one of the only observations of a hungry sea star midmeal, munching on a sea lily dinner.

For now, the species and behavior of the tightly clenched squid remain intriguing puzzles for scientists.

"It's a remarkable observation," Vecchione said in the video. "I wish I could tell you what it was."