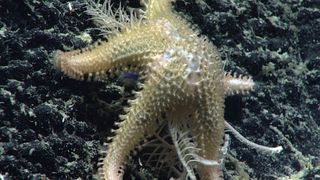 This sea star was found feeding on a crinoid during a recent ocean research expedition.
(Image: © NOAA Office of Ocean Exploration and Research)

A hungry sea star can find its dinner in unusual places, scientists discovered during a recent ocean expedition.

The Okeanos Explorer, a research ship operated by the National Oceanic and Atmospheric Administration, is currently on an exploration voyage in the Pacific Ocean. During a recent dive with a remotely operated vehicle (ROV) in an area known as the "West Palmyra Seamount," researchers aboard the ship captured video of a sea star chowing down on something unexpected: a crinoid, a marine animal that looks like a plant is also known as a sea lily or feather star.

Sea stars, or starfish, are mostly carnivorous, according to the National Aquarium in Baltimore. The invertebrates use their suction-cupped feet to open clams, oysters and other mollusks. [Marine Marvels: Spectacular Photos of Sea Creatures]

"There's not a lot to eat on crinoids, frankly," a researcher aboard the Okeanos Explorer said in a video during the dive. "I kind of wonder if these are just opportunistic moments."

Another researcher quipped that the sea star finds its dinner where it can.

But the sea star's choice of dinner was not the only unusual aspect of this sighting, according to the scientists. Christopher Mah, a research collaborator at the Smithsonian National Museum of Natural History and a participating scientist in the expedition, said this was one of the only observations of the sea star genus Lophaster in the act of feeding. It was also the first sighting of the genus in the area, and marks a new record for the deepest-known record encounter of Lophaster, he said.

"In some parts of the world, this species can be encountered at very shallow depths while SCUBA diving," Mah told Live Science. "But here, it was observed in over 2,100-meter [1.3 miles] depths."

It is possible that the Lophaster spotted by the Okeanos team is a new or undescribed species, Mah added.

Beyond capturing these unusual underwater moments, the current Okeanos expedition is part of a three-year campaign to study the science, technology and ocean needs of the Pacific Remote Islands Marine National Monument (PRIMNM). The initiative aims to collect information about the marine ecosystem, and observations made by the Okeanos team will be used to support science and management decisions in and around the protected marine areas.

Previous expeditions by the Okeanos Explorer have captured footage of a deep-sea fish that "walks" along the ocean floor, a ghost-like octopod that may be an undescribed species, a spaceship-like jellyfish and more.

Editor's Note: This story was updated to include more information about the sea star and its unusual meal.