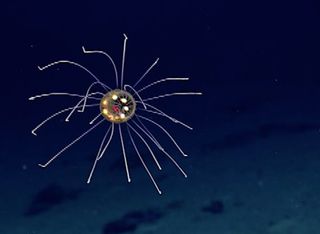 On April 24, 2016, scientists spotted this bizarre jellyfish around the Mariana Trench in the Pacific Ocean.
(Image: © NOAA Office of Ocean Exploration and Research, 2016 Deepwater Exploration of the Marianas)

With red and yellow lights seeming to glow inside its bulbous body, a newfound jellyfish looks more alien spaceship than deep-sea cnidarian.

Using a remotely operated vehicle (ROV), marine scientists dove to the deepest part of the world's oceans, called the Mariana Trench, east of the Mariana Islands near Guam in the western Pacific Ocean; they were exploring the so-called Enigma Seamount (named for the lack of information scientists have on it) when they came upon this surreal-looking creature.

Video captured of the jellyfish reveals a stunning sight: The organism sports two sets of tentacles, long and short, that extend from its pulsating bell. When the long tentacles are extended outward, the jellyfish's bell remains still. That feature, the researchers noted in a statement by the National Oceanic and Atmospheric Administration (NOAA), suggests the jellyfish is an ambush predator. [Video: Watch the Alien Jellyfish in Action]

Inside the bell, which resembles a flying saucer of sorts, are red canals that seem to connect bright-yellow gonads, according to the scientists. From the looks of the jellyfish, the researchers identified it as belonging to the genus Crossota.

"Its morphology is quite different from other seamounts in the region, which generally have a flat top with steep, smooth sides radiating out into narrow ridges," they wrote in a daily log of the expedition. "By contrast, this one is more circular in form and the sides are much less smooth."

Throughout the ROV dive, the researchers also noticed "small, rounded balls that looked like they had been constructed from sediment," they wrote. The balls could be a large species of single-celled amoeba or they could be marine sponges, the researchers said. Though deep-sea animals were scarce, the researchers said they did observe some wacky creatures, including "stalked crinoids and primnoid corals, swimming polychaete worms, a cusk eel, Caulophacus sponges, cladhorizid sponges, a Munidopsis squat lobster, a beautiful hydrozoan jellyfish and at least two Nematocarcinus shrimp."

This leg of the expedition is scheduled to end May 11, with the second leg slated for a May 20 departure, with the third leg set to begin June 17.