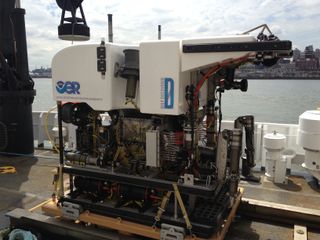 NEW YORK CITY — What life lurks in the underwater canyons off of the U.S. Northeast?

A new, federally owned remotely operated vehicle (ROV) is uncovering the secrets of the deep, having finished the initial leg of its first official exploratory expedition. Media and curious visitors got a glimpse of the ROV today (July 26), aboard the Okeanos Explorer, docked here along the East River.

The ROV has already turned up the first visual confirmation of gas seeps in the seafloor south of Nantucket, the farthest north that gas seeps have been spotted along the East Coast, said Webb Pinner, an engineer aboard the ship, which is owned by the National Oceanic and Atmospheric Administration (NOAA). At this spot, southeast of Nantucket, Mass., researchers found a large group of mussels and other animals that live off of the chemical energy that bubbles out of the sea bottom.

Pinner spoke from within the ship's control room, a cave-like chamber filled with huge monitors that allow engineers to keep tabs on the ROV's every move and to see what it sees. All the data is transmitted via a huge satellite dish housed in an orb-like ball atop the ship, making it possible for researchers all over the word, and the public, to follow along as the team explores the little-known seafloor. [Video: Okeanos Explorer: America's Ship for Exploration]

"We always bring thousands of scientists with us," said Richard Conway, a technician aboard the ship, referring to those watching by satellite.

It's the first official exploration for the ROV, named the Deep Discoverer, or D2, which was built just this past winter. Since early July, theOkeanos Explorer has deployed D2 into several canyons, including the Hudson Canyon, which extends hundreds of miles east from the Hudson River along the seafloor. Over the millennia, the river has carved a channel through the edge of the continental shelf, where the North American continent ends, before sloping into the Atlantic Ocean Basin.

The ROV found tons of coral off the Northeast, within the Hudson and other canyons, which was much more than expected, Pinner said. The researchers also captured some stunning footage. "The Hudson Canyon is really beautiful," he said.

Along the way, the team has found all sorts of unique life forms, like a bathysaurus, a bizarre-looking fish that uses its lower jaw to scoop sand and filter out food. Researchers also found evidence of octopuses laying eggs in sea sponges, and the scientists saw the eggs hatching, Pinner said.

In one submarine canyon, the team happened upon a bobtail squid, a unique animal that looks a little bit like a blob. The team named it Percy, and the creature has served as something of a mascot for the scientists, said Meme Lobecker, who is in charge of the ship's sonar-based mapping.

Along the way, the team also found a fair amount of seafloor trash, such as plastic bags, fishing gear and lobster pots, Lobecker said. However, the trash is scant compared to that found in the Mediterranean, ("a dump," Pinner said), where one four-hour dive turned up 140 full plastic trash bags, Pinner said.

Much of the time as the ship moves it maps the seafloor. The mapping equipment, which works by bouncing sound beams off of the seafloor and determining the distance between the ship and the sea's bottom, produces measurements so accurate that the tool can detect marble-sized gas bubbles rising thousands of feet beneath the surface, Lobecker said.

The Okeanos Explorer is unique because it is the only federally owned ship whose sole purpose is to explore the seafloor, said Dave Lovalvo, team coordinator of the ROV. While the ROV explores, it is illuminated by Seirios, a camera sled that is deployed next to D2 and floods it with 4,200 watts of light, he said.

The ship is docked here until July 31, when it will depart to explore underwater seamounts and additional submarine canyons off of the Northeast coast, Lovalvo said.