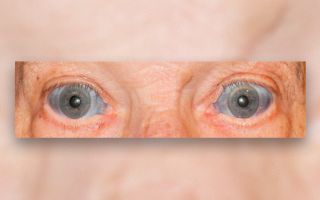 A 70-year-old man went to the doctor because the whites of his eyes, known as the sclera, were turning blue.
(Image: © The New England Journal of Medicine©2018)

Blue eyes are pretty common, but what about blue in the whites of your eyes?

No, we aren't talking about sclera tattooing. A 70-year-old man went to the doctor because the whites of his eyes were turning blue.

The man told doctors that he didn't have blurry vision or eye pain, but over the past year, the whites of his eyes had gradually turned bluish, according to a new report of the man's case. ['Eye' Can't Look: 9 Eyeball Injuries That Will Make You Squirm]

Doctors tested the man's vision along with other indicators of eye health, and the results were all normal. But the whites of his eyes were indeed a bluish color, as were parts of his ears, according to the report, published today (April 18) in the New England Journal of Medicine.

The reason for the man's discolored eyes and ears turned out to be in his medicine cabinet: He told doctors he'd been taking a medication called minocycline as a treatment for inflammatory arthritis for 15 years. Minocycline is an antibiotic typically used to treat bacterial infections, but because the drug has anti-inflammatory effects, it's sometimes used to treat rheumatoid arthritis (a type of inflammatory arthritis), according to the American College of Rheumatology.

A side effect of minocycline is that, if used for a long time, it can cause discoloration of the skin, ears, fingernails, teeth, gums, scar tissue and, yes — the whites of the eyes, or the sclera, the report said.

It's unclear exactly how common this side effect is. A 2016 study of nearly 300 patients taking minocycline for prosthetic joint infections found that about half of the patients had some skin discoloration (hyperpigmentation) after an average of five years. But just 3 percent of the participants had discoloration of the whites of their eyes.

Exactly how minocycline leads to discoloration of tissues is not known. But it's thought that a metabolite, or byproduct, of the drug may form "insoluble complexes" with melanin — a natural pigment in our skin, hair and eyes — which then become deposited in body tissues, the new report said. The discoloration may fade over time, or it may be permanent.

Doctors advised the man to stop taking minocycline to see if the discoloration in his eyes would improve, Sayegh told Live Science. The man was switched to another drug for inflammatory arthritis, called methotrexate.

However, one year after stopping minocycline, doctors did not see much improvement in the man's sclera discoloration, the report said.