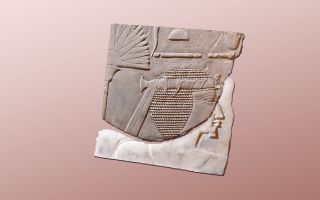 A detailed carving hauled out of storage at Swansea University in Wales depicts the face of the famous female pharaoh Hatshepsut.

The limestone piece wasn't expected to be so intriguing. A part of the former collection of early pharmaceutical entrepreneur Henry Wellcome, the piece had been boxed up at Swansea since about 1971, said university Egyptologist Ken Griffin. After finding a black-and-white photograph of the piece a year ago, Griffin requested that it be brought out of storage for an artifact-handling session with Egyptology students. When he saw it in person, he immediately realized it was something unexpected. [In Photos: The Life and Death of King Tut]

"It was unbelievably exciting, not just for me, but for the students," Griffin said.

The carving consists of two glued fragments, together a little larger than a dinner plate. On the front is a carved head in profile, with much of the face broken off. Hieroglyphs decorate the space above the figure's brow. On the back of the upper fragment is a strange partial carving of a man's chin and beard.

Originally, the piece was thought to date to the 11th dynasty of Egypt, which ran from the early 2000s B.C. to about 1991 B.C, Griffin told Live Science. However, he added, as soon as he saw the piece in person, he realized it was actually from the 18th dynasty, which spanned from about 1500 B.C. to 1292 B.C.

"The hairstyle; the way the face is done, including the eye; every little detail; the fan behind the head," Griffin said, listing a few of the artistic flourishes that screamed "18th dynasty" to him. The limestone was also of the color and type found at the temple of Hatshepsut at Deir el-Bahri near Luxor. Clinching the identification of the figure as the female pharaoh was a feminine "S" hieroglyph above the head, Griffin said.

Unfortunately, the piece doesn't hold much new information about Hatshepsut herself, who reigned between about 1478 B.C. and 1458 B.C. It's not unusual to find fragments from Deir el-Bahri in scattered Egyptology collections around the world, Griffin said; in the late 1800s, treasure hunters lifted carvings from ancient sites wholesale.

"It seems that anyone going on holiday could have picked up various fragments and brought them home," Griffin said.

The carving bears witness to this casual attitude toward historical artifacts, he said. On the back of the top fragment is the partial carving of a man's chin and beard. This piece, if detached, would fit like a puzzle piece against the original broken-off face of Hatshepsut. Most likely, a late 19th-century or early 20th-century auctioneer or antiques dealer decided the carving would be more valuable if "complete," Griffin said. Not realizing that the carving on the front was female, the dealer mocked up a male chin to add to the original carving. (Hatshepsut was often depicted with the royal beard, befitting her status as pharaoh, Griffin said, but the beard in the carving is a short one of the type typically worn by lower-status officials.)

"They've basically given Hatshepsut a new face, not realizing that it was female, so they've done it with a short beard," Griffin said.

The piece won't be going back on mothballs anytime soon. It's now on display at Swansea's Egypt Centre. And Griffin said he has his eye on a few more potentially mysterious pieces in the university's collection.

"We've got another two handling sessions coming up after Easter," he said, "and you never know what you'll find."

Editor's Note: This article was updated to correct the spelling of Griffin's name.