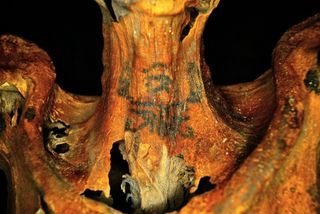 Tattoos found at the mummy's neck show several Wadjet eyes — a sign associated with the divine and with protection.
(Image: © Ann Austin)

More than 3,000 years ago, an ancient Egyptian woman tattooed her body with dozens of symbols — including lotus blossoms, cows and divine eyes — that may have been linked to her religious status or her ritual practice.

Preserved in amazing detail on her mummified torso, the surviving images represent the only known examples of tattoos found on Egyptian mummies showing recognizable pictures, rather than abstract designs.

The mummy was found at a site on the west bank of the Nile River known as Deir el-Medina, a village dating to between 1550 B.C. and 1080 B.C. that housed artisans and workers who built the royal tombs in the Valley of the Kings. [In Photos: Egypt's Oldest Mummy Wrappings]

Stanford University bioarchaeologist Anne Austin was examining human remains at Deir el-Medina for the French Institute of Oriental Archaeology when she first glimpsed unusual markings on a mummy's neck.

Austin initially thought the markings on the neck had been painted there, she told Live Science in an email. According to Austin, it was a common practice in Egypt at that time to place amulets around the neck before a burial. She suggested that amulets could have been drawn on the skin for the burial as well, which could have been the case for this torso.

But further investigation of the mummy revealed that these ancient illustrations — and others on the body — were unusual, hinting that they might be a more permanent skin adornment than a painted design, she said.

"As we started to analyze the markings on the arms, we realized that these markings were shrunken and distorted," Austin said. "Therefore, they must have been made prior to mummification."

Together with archaeologist Cédric Gobeil, director of the French Archaeological Mission of Deir el-Medina, Austin cataloged dozens of tattoos, many of which have yet to be identified. But a number of them were recognizable and had religious significance.

"Several are associated with the goddess Hathor, such as cows with special necklaces," Austin told Live Science. "Others — such as snakes placed on the upper arms — are also associated with female deities in ancient Egypt."

The mummy's neck, back and shoulders were decorated with images of Wadjet eyes — divine eyes associated with protection.

The Wadjet eyes on the neck may have carried yet another layer of meaning: Additional images known as nefer symbols, "the sign of beauty or goodness," appeared between them, Austin said.

"At the nearby site of Deir el-Bahri, the combination of the Wadjet and nefer have been interpreted as a formula for the phrase 'to do good,'" Austin said.

Austin explained that the symbols' position on the woman's throat — directly over her voice box — may have signaled that whenever the woman spoke or sang, she invoked a ritual power to do good.

These figural tattooed images — the first of their kind found on an Egyptian mummy — provide important clues about the significance and symbolic nature of tattooing within ancient Egyptian culture, Austin said.

"Interestingly, all of the tattoos found so far have been exclusively on women, though we are curious to see if that trend continues as more tattoos are identified," she added.