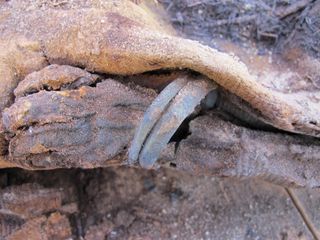 This image is of a child, around 18 months old, who was wrapped in a tunic and buried with a necklace and two bracelets on each arm. The jewelry makes the team think that the mummy is a girl but they cannot be sure.
(Image: © Photo courtesy Professor Kerry Muhlestein)

TORONTO — She's literally one in a million.

The remains of a child, laid to rest more than 1,500 years ago when the Roman Empire controlled Egypt, was found in an ancient cemetery that contains more than 1 million mummies, according to a team of archaeologists from Brigham Young University in Provo, Utah.

The cemetery is now called Fag el-Gamous, which means "Way of the Water Buffalo," a title that comes from the name of a nearby road. Archaeologists from Brigham Young University have been excavating Fag el-Gamous, along with a nearby pyramid, for about 30 years. Many of the mummies date to the time when the Roman or Byzantine Empire ruled Egypt, from the 1st century to the 7th century A.D. [See photos of the million-mummy cemetery]

"We are fairly certain we have over a million burials within this cemetery. It's large, and it's dense," Project Director Kerry Muhlestein, an associate professor in the Department of Ancient Scripture at Brigham Young University, said in a paper he presented at the Society for the Study of Egyptian Antiquities Scholars Colloquium, which was held last month in Toronto.

This cemetery was not a burial ground for kings or royalty. The people buried here were often laid to rest without grave goods, and without coffins for that matter, the researchers said. The deceased's internal organs were rarely removed; instead, it was the arid natural environment that mummified them. "I don't think you would term what happens to these burials as true mummification," Muhlestein said. "If we want to use the term loosely, then they were mummified."

Despite the low status of the dead, the researchers found some remarkably beautiful items, including linen, glass and even colorful booties designed for a child.

"A lot of their wealth, as little as they had, was poured into these burials," Muhlestein said.

The mummified child was buried with several other mummies. It was wrapped in a tunic and wore a necklace with two bracelets on each arm.

"There was some evidence that they tried much of the full mummification process. The toes and toenails and brain and tongue were amazingly preserved," the researchers wrote on the project's Facebook page. "The jewelry makes us think it was a girl, but we cannot tell."

Researchers estimate the infant was 18 months old when she died. "She was buried with great care, as someone who obviously loved her very much did all they could to take care of this little girl in burial," the researchers wrote. It's "very sad, but they succeeded. It was a beautiful burial."

Where exactly these million mummies came from is an ongoing mystery, and one that the team has yet to solve. A nearby village seems too small to warrant such a large cemetery, the researchers said. There is an ancient town named Philadelphia (so named after King Ptolemy II Philadelphus) not far away, but that town has burial sites of its own. [8 Grisly Archaeological Discoveries]

While there is a small pyramid nearby, it was built more than 4,500 years ago, which is more than two millennia before the cemetery was first used.

"It's hard to know where all these people were coming from," Muhlestein told Live Science.

A mummy over 7 feet tall

The stories that these million mummies tell appear endless. The Brigham Young team has excavated more than 1,000 of the mummies over the past 30 years, and Muhlestein admits the team has a publishing backlog.

One discovery that hasn't been published is of a mummy who is more than 7 feet (2 meters) tall. "We once found a male who was over 7 feet tall who was far too tall to fit into the shaft, so they bent him in half and tossed him in," Muhlestein told the audience in Toronto.

That's an extraordinary height given the generally poor nutrition these people had, Muhlestein told Live Science in an interview, adding that "even with great nutrition, it's really unusual" for an individual to reach that height. The great height could be because of a medical condition that caused an excess of growth hormone, but more research needs to be done to determine this.

This surprisingly tall mummy was discovered before Muhlestein became director, and the findings have yet to be published, he said. "We have a large publishing backlog, [and] we're trying to catch up on making our colleagues and the public aware [of the finds]."

While excavating and publishing the discoveries from the cemetery pose daunting challenges, they also provide archaeologists with terrific opportunities.

For instance, the team is in the early stages of creating a database of all the mummies it has excavated. When complete, the database will help the researchers study burial patterns in the area.

These clusters are interesting because they suggest "perhaps we have family areas or genetic groups [in certain areas], but we're still trying to explore that," Muhlestein said.