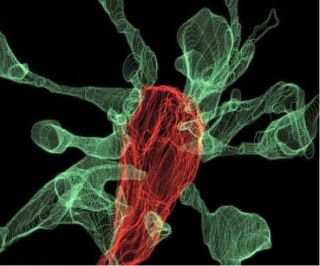 An image showing microglia (red) "eating" a synapse. The green projections, called filopodia, are sent out by the synapse to contact the microglia cells.
(Image: © L. Weinhard, EMBL Rome)

It's snack time for your brain cells: New images show the brain's "helper cells" nibbling on synapses, the connections between neurons.

The helper cells, called microglia, provide support for the brain's neurons. Researchers have proposed that microglia engulf and eat synapses as part of a brain circuit "pruning" process that occurs during brain development. But no one had actually seen this process take place — until now.

"This is what neuroscientists fantasized about for years, but nobody had ever seen [it] before," Cornelius Gross, a senior scientist at the European Molecular Biology Laboratory in Rome who led the study, said in a statement. "These findings allow us to propose a mechanism for the role of microglia in the remodeling and evolution of brain circuits during development."

Getting these visuals was no easy feat; it required five years of technological development, according to the researchers. Studying mouse brain cells, the researchers tried three state-of-the-art imaging systems before finding the right method to get the images. Ultimately, they used a combination of two imaging systems called "correlative light and electron microscopy" and "light sheet fluorescence microscopy," the latter of which was developed at their institution. [10 Things You Didn't Know About the Brain]

The study found that about half of the time microglia come into contact with a synapse, the synapse head sends out thin projections, called "filopodia," to greet the microglia, the researchers said. The microglia may also help with the formation of "double synapses," in which the end of a neuron sends neurotransmitters to two neighboring neurons instead of one. This may help support effective connectivity between neurons, the researchers said.

The researchers now plan to study the role of microglia in brain development during adolescence.

The new study was published yesterday (March 26) in the journal Nature Communications.