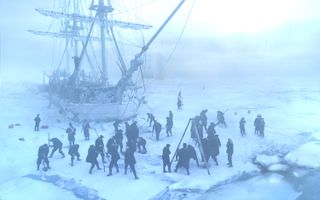 The crew of the icebound HMS Terror prepare for the worst.
(Image: © AMC )

A 19th-century ocean journey made by adventurers who intended to navigate the Northwest Passage and open a quicker trading route to China and India for the British Empire went horribly wrong instead, stranding 129 men in the frozen Arctic and eventually costing all of them their lives, but not before they apparently turned to cannibalism.

The expedition, carried out by the British Royal Navy ships HMS Terror and HMS Erebus, set sail in May 1845, and was abruptly halted in September 1846 after sea ice trapped the two vessels near King William Island in the Victoria Strait. While the ship was icebound, the officers and crew faced freezing temperatures and eventual starvation, with little hope of rescue.

None of the men survived, and though what they endured is still largely shrouded in mystery, a new television series — "The Terror," which premiered yesterday (March 26) on AMC — imagines the perilous trials the doomed crew may have encountered in the face of brutal and deadly Arctic conditions. [In Photos: Arctic Shipwreck Solves 170-Year-Old Mystery]

In the 10-part AMC drama, the desperate crew of the Terror and Erebus are tested to the breaking point and beyond, as they are frozen, starved, stalked by predatory beasts and weakened by blinding storms, treacherous ice and their own fear and despair. To the trapped men, the inhospitable landscape seems intent on their destruction: As Capt. Francis Crozier (Jared Harris) tells a fellow officer in the series trailer, "This place wants us dead."

What little is known about their actual fate — and what the TV show is based on — was pieced together in the decades following the ships' fate. Search parties have found scattered and fragmentary records and artifacts from the expedition, and they have recovered stories about the lost men from the Inuit people who interacted with them, the Canadian Museum of History (CMH) explained on its website. The museum pieced together the expedition's story for an exhibit on the doomed expedition, called "Death in the Ice."

The expedition leader, Sir John Franklin, perished on June 11, 1847, and the men deserted the ships on April 22, 1848. By then, 24 men had died, even though the ships were still stocked with food. On April 25, a note left by officers at King William Island described a plan to try to reach a trading post in the Canadian Northwest Territories, but the men were never heard from again, and all were officially declared dead on March 31, 1854, according to CMH.

While Crozier does say in the show that the Arctic is trying to kill the men of the Erebus and the Terror, of course, the frozen region didn't hold a special grudge against them — its conditions are challenging for anyone's survival. Temperatures that plummet to minus 40 degrees Fahrenheit (minus 40 degrees Celsius) can be exceedingly dangerous and even life-threatening, Matthew Shupe, an Arctic researcher with the National Oceanic and Atmospheric Administration's Earth System Research Laboratory, told Live Science.

Shupe, who has worked in Arctic research stations looking into the interactions of clouds, atmosphere and sea ice, knows firsthand how difficult it can be to function in such extreme cold. Besides the energy needed to keep one's body warm, and thus less of it to work, the sea ice can be treacherous to navigate, with unseen cracks that could send one plunging into the life-threateningly cold water, he said.

In the darkness of Arctic winter, the forbidding terrain almost seems to belong to another world, Shupe recalled. "The surface has different features to it. There are pressure ridges and different formations in the snow and ice surface," he said.

"You kind of see shadows emanating off this textured surface, with winds blowing really fast, snow skimming across the surface. It's a surreal landscape — that wind and snow and darkness all together make it really challenging to operate, to see what we're trying to do and where we're trying to go," Shupe told Live Science. [In Photos: Research Vessel Headed to 'Hidden' Antarctic Ecosystem]

In 1850, three frozen corpses belonging to missing Terror and Erebus crewmembers were discovered in the northern Arctic, and more remains turned up to the south in 1859. Because the region was known to be a poor source of game and fish, experts suspected that the men who trekked into the wilderness had starved to death, but a growing body of evidence that surfaced over the next 150 years painted an even more gruesome picture, suggesting that before the men died, they turned to cannibalism to survive.

In 1854, a Canadian mapmaker heard stories from Inuit people in the area about incidents of cannibalism, and remains of the crew that were discovered in the 1980s and 1990s showed cut marks on the bones — signs that someone had carved off the flesh, researchers reported in October 2016 in the International Journal of Osteoarchaeology.

In fact, some of the long bones were cracked open, likely by starving men desperate to reach the marrow, the scientists wrote in the study.

It is unclear why so many men died on the ships when the vessels were well-supplied, or why they chose to abandon the ships at all, striking out in unfamiliar and dangerous territory with only a slim hope of survival. However, one possibility is that severe vitamin or mineral deficiencies could have further impacted the men's health or impaired their mental facilities, leading them to panic or make unsound decisions.

In recent years, Canadian researchers pinpointed the resting places of the missing ships, spotting the Erebus in 2014 and the Terror in 2016 — though there are as yet no new records that shed light on what befell their crews. While the true details of what these men endured may be lost to history, the dramatic scenes of "The Terror" hint at the brutality of the icy landscape that tested and ultimately broke them.

The first two episodes of "The Terror" debuted March 26 on AMC at 9 p.m. Eastern time.