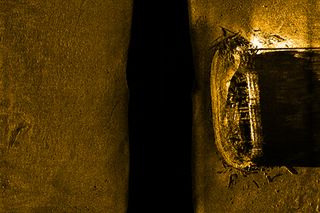 In 1845, two doomed British ships set sail for the Canadian Arctic to end a legendary quest for the Northwest Passage to the Pacific Ocean. After the expedition became trapped in ice, both vessels and all 129 men on board were lost. Now, nearly 170 years later, one of the shipwrecks has been found.

Canadian authorities have released sonar images that show the skeleton of one of the two ships lost during the Franklin Expedition. (The voyage was named after the expedition's leader, British Royal Navy officer and explorer John Franklin.) Canadian Prime Minister Stephen Harper said that the discovery "has solved one of Canada's greatest mysteries."

"Although we do not know yet whether the discovery is Her Majesty's Ship (HMS) Erebus or HMS Terror, we do have enough information to confirm its authenticity," Harper said in a statement. "This is truly a historic moment for Canada. Franklin's ships are an important part of Canadian history given that his expeditions, which took place nearly 200 years ago, laid the foundations of Canada's Arctic sovereignty." [See Photos of the Newly Discovered Shipwreck]

The graves of Erebus and Terror jointly had the distinction of being Canada's only undiscovered national historical site. Dozens of search crews have looked for the ships since they went missing. Just since 2008, Parks Canada led six major expeditions to look for the ships, peering at hundreds of square miles of the Arctic seabed with underwater robots and sonar. Success finally came this week for the 2014 Victoria Strait Expedition.

The fate of the Franklin Expedition has been an enduring mystery and fodder for much speculation. The three-masted ships Erebus and Terror had steam engines and iron-reinforced bows to punch through sea ice. The vessels had successfully completed a mission in Antarctica, but they were apparently no match for the ice-choked waterways of the Canadian Arctic.

It's believed that many of Franklin's men died of some combination of exposure to the elements, starvation, scurvy and lead poisoning (possibly from eating poorly canned foods) in the months and weeks after the ships became icebound near King William Island. In the 1850s, Britain was scandalized by reports that some of the crew resorted to cannibalism, based on stories an Inuit relayed to explorer John Rae, according to Canadian Geographic. Archaeologists later found cut marks on skeletal remains of crew members buried in shallow graves in the Arctic, suggesting there might be some truth to those grisly reports.

"The discovery of a Franklin expedition ship raises the possibility that some of the enduring mysteries surrounding the expedition's destruction can be solved," John Geiger, CEO of the Royal Canadian Geographical Society, said in a statement. "It's a wonderful and exciting discovery that promises to shed more light on the ill-fated expedition's final months, weeks and days."