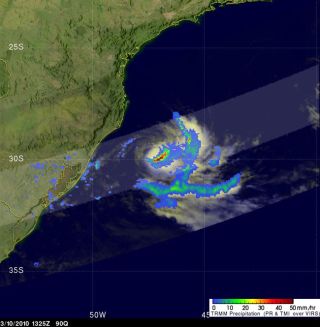 On Wednesday, March 10, the Tropical Rainfall Measuring Mission, or TRMM satellite had a fairly good pass this over Tropical Storm 90Q in the morning hours and showed some heavy rainfall (~2 inches/hr in red) on the storm's southeastern side.

The second ever tropical cyclone to form in the South Atlantic has been spotted about 180 miles off the coast of Brazil.

Tropical cyclones typically don't form in the Southern Atlantic because the waters are usually too cool.

However, forecasters at the Naval Research Laboratory noted on Tuesday that a low pressure system off the coast of Brazil appeared to have tropical storm-force winds. The storm has been dubbed Tropical Storm 90Q.

The first known South Atlantic tropical cyclone (the collective name for tropical storms, hurricanes and typhoons) was seen in 2004 and called "Catarina."

"The only other tropical cyclone known to have occurred in the Southern Atlantic Ocean developed in March, 2004," said Hal Pierce, meteorologist on the TRMM satellite team at NASA's Goddard Space Flight Center in Greenbelt, Md. "That's when a hurricane called "Catarina" made landfall on March 28, 2004 near the town of Torres in the southern Brazilian state of Santa Catarina (thus, the storm's name). It was the first "hurricane" ever observed by satellite in the south Atlantic."

Two NASA satellites have now confirmed that the storm is moving away from Brazil's coast.

Tropical Storm 90Q will continue moving in a general easterly direction away from the Brazilian coast and weaken before being absorbed by a mid-latitude cold front this weekend, meteorologists predict.

Hurricane season in the North Atlantic basin and Caribbean officially begins on June 1.